One of my favorite things about film is that, depending on the person, a film can be interpreted in a million different ways. I went to see The Nightingale with my friend, Julie (click here for her website. It’s wonderful). Now, I am white and Julie is not. It stands to reason that we would both view this film differently, especially in today’s day and age. When we left the theater, I began talking about Jennifer Kent’s ability to craft a layered script. I asked Julie what she thought and she responded with “I hated it.” It was through the conversation that followed that it was brought to my attention that this film, whether intentional or not, can be classified as a “white savior” film. This hadn’t even occurred to me during my viewing. From this point on, I reconsidered all of my opinions about the film, trying to figure out if I thought certain things about it because of my skin color and my life experiences. I think that’s why it has been so hard for me to write my thoughts down.

Yes, both the characters of Claire and Billy are troubled. Yes, there are many layers to the 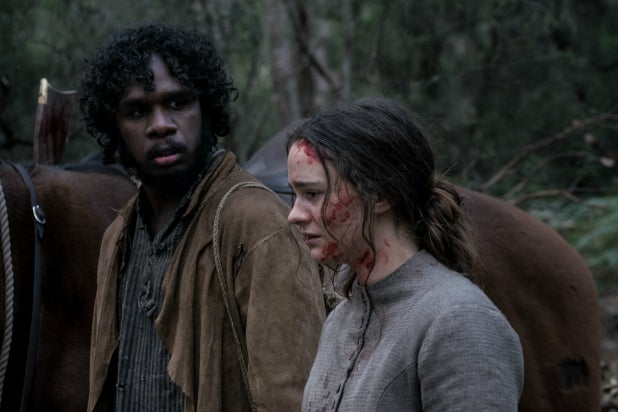 film such as: relations between the Irish and English, male and female, natives and colonists. But, there’s the relationship between black and white. We, once again, are presented with a film where a white person learns that the black person is just like them. It’s a tiring narrative that needs to evolve into something else or just disappear entirely. But, until films like Green Book stop winning Academy Awards, I fear that we are stuck in this endless loop.

Had The Nightingale been written by a person of color, the above conversation may have never happened.

To look at this film strictly from an execution stand point, Jennifer Kent masterfully wove layers into her script. The performances that she managed to get out of her actors were outstanding. I was incredibly impressed. The film was beautifully photographed. Even the way Kent chose to show the violence was well done. Thought was put into all of it. For example, the scene that has stuck with me the most, the scene where Claire’s baby is killed, was masterfully shot with the audience’s view being obstructed just enough. We could only kind of see what was happening, but we could hear everything.

This film made me realize that I know very little about the history of Australia. Some may argue that, as a viewer, you shouldn’t have to know the history of what you’re watching to understand. I would disagree, mainly when what you are watching is a period piece. After doing some research, I came to learn that the brutality and violence

depicted in The Nightingale, unfortunately, is historically accurate. The brutality and the graphic depictions of rape caused some viewers to walk out of showings of this film. But, as far as being a filmmaker goes, if you can evoke any kind of strong visceral reaction from your audience, you’ve succeeded. Whether that reaction is good or bad is irrelevant.

This film did not sit well with me. The  “white savior” aspect ultimately just put a bad taste in my mouth and the violence and rape shown on screen put me at great unease. But, seeing as this is only Jennifer Kent’s second film that she’s written and directed, I am interested to see what she does next, which direction she goes.