Straight up, this is on my list of favorite films. David Fincher’s directing style can be hit or miss for me. For example, in The Social Network, I think his color filter look does not quite fit. But, in Se7en, the darker filters and darker color palette works quite well. This film, although very different from the other films I have talked about in this series, still feels very 1990s. Crime thrillers of this era all seemed to have a certain feel to them. It’s a bit hard for me to put into words, but they all feel very brooding. Se7en is no exception.

The writing, I feel, is phenomenal. The way the story unfolds is compelling. On top of that, Brad Pitt, Morgan Freeman and Kevin Spacey (unfortunately) give top performances. This is only the second film that features Kevin Spacey that I have watched since October of 2017. (The first one was Outbreak because I’m a sick individual). And, as I’ve stated before, it is hard to watch somebody who has been accused of doing horrendous things in a film. But, all those that worked on the film and acted in the film deserve to have their work still seen, so here we are. Spacey plays the horrendous character of John Doe, who we are supposed to hate, so that helps some.

The ending to this film has been referenced and parodied in other media since 1995, but 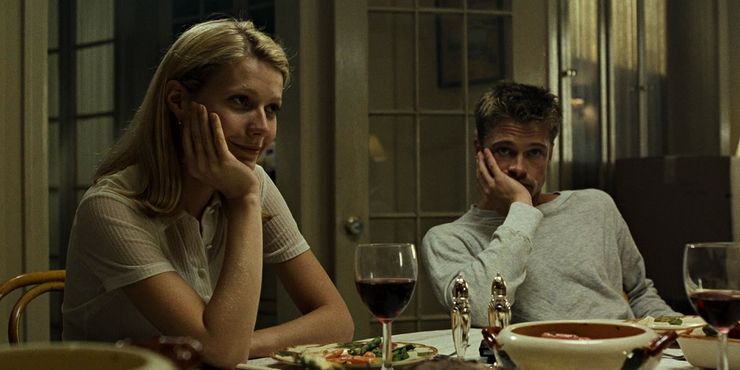 that doesn’t make it any less shocking. (Spoilers ahead, but if you haven’t seen the film, it’s been out for over 20 years, so…) The reveal that Pitt’s character, Mills, is John Doe’s target for the sin of vengeance is shocking. It’s not one that the audience ever sees coming. When Somerset, Morgan Freeman’s character, opens the package that has been delivered to him and we merely see his face and then the tiniest bit of blonde hair fluttering out of the box, it is bone chilling. This entire sequence was so well crafted. I would even dare to say that it is one of the best film endings in cinematic history, from the script itself to the cinematography to the acting.

Plus, this film has blessed me with a line that I use as frequently as possible in everyday conversation: