A naive hustler travels from Texas to New York City to seek personal fortune, finding a new friend in the process.

Alright, alright, we are once again looking at the Hollywood New Wave, and I am pumped about it. This was the first time I have ever watched Midnight Cowboy, and I knew only the following: It was originally rated X, making it the only X rated film to have ever won Best Picture at the Academy Awards, and that it starred Jon Voight (who I am not a fan of) and Dustin Hoffman. Also, the “I’m walkin’ here” line is one of the great moments of improvisation in film (although, I do like the line that comes after it a little better).

I did not expect to like this film as much as I did or for it to make me as sad as it did. However, I would also say that this film has not aged particularly well, as it doesn’t really do any good for the LGBTQ+ community.

One of the reasons that I love the films of this era is because they usually had bold statements to make. Midnight Cowboy is no different. This film makes large statements on homosexuality, media, sex, and the anti-American dream. The motif of the Cowboy is used in varying ways. On one side, we have Jon Voight’s character, Joe Buck, who dresses as a cowboy because, in the south at the time, that’s how a “manly man” would dress. Although, he states several times that he isn’t a real cowboy, he wants people to perceive him this way. Once he arrives in the north, he finds out about the “gay cowboy” symbol, and how he may not be sending the message he wants to send. So, simultaneously, the cowboy motif is being used to symbolize macho masculinity and homosexuality.

Buck’s insecurities about his sexuality may very well stem from what we are shown in multiple flashbacks (as horrible as this may be). In Texas, Buck had been dating a mentally unstable woman. Both he and that woman were gang raped by a group of cowboys.

Now, although Buck continues to deny that he is homosexual, we the audience are never really quite convinced, as he continues to engage in homosexual acts in the hope of making money and is only able to have sex with one woman after she questions his sexuality in a game of Scribbage.

The seamless entanglement of sex, money, and media in this film is astounding. To start off, Joe Buck carries around a radio that he is constantly listening to and using to guide him through first the country, and then through New York City. Now, Buck came to the city to be a “hustler”, which is the film’s more masculine way of saying prostitute. His first encounter with a woman and subsequent encounters after, media such as television and film are used to symbolize the sexual climax, which considering this film was already rated X (for whatever reason), it’s interesting to me that director John Schlesinger chose to depict it this way. With Buck being a prostitute, there is obviously money involved, whether it’s them paying him or him paying them. On top of that, outside the window of the hotel room Buck is staying at upon first arriving in New York City, he can see a sign for Mutual Of New York, where the only letters lit up are M.O.N.Y.

Prior to these sexual escapades, Joe Buck meets Ratso, played by Dustin Hoffman. He develops a real friendship with Ratso, after Ratso initially set Buck up with a man Buck 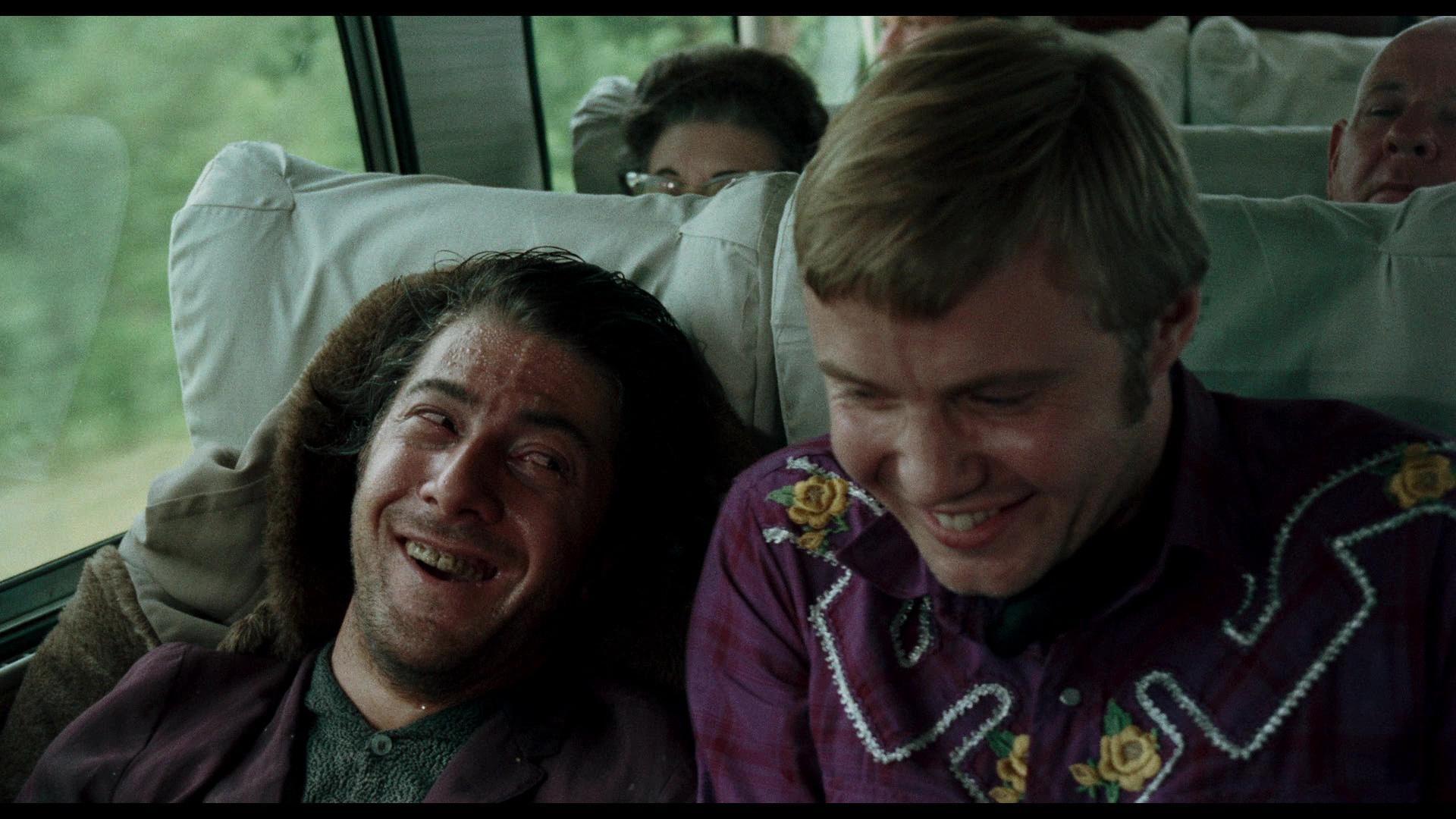 thought was a pimp, but turned out to be an “unhinged homosexual religious fanatic” (which that alone is a hell of a scene to unpack). In a career making performance, Dustin Hoffman portrays Ratso as a lowlife with a decent heart, you could say. He’s a conman who’s ill, who has a limp. As Buck gets more successful, Ratso gets sicker. Just when Buck is really about to make it big (but also after he definitely killed a man), Ratso takes a turn for the worst. Buck takes Ratso on a bus trip to Florida, as that’s where Ratso has been convinced he can get better. On the way, Joe Buck finally abandons the cowboy look, which one could take as him accepting himself. Unfortunately, Ratso does not quite make it to the end destination in an absolutely heartbreaking scene on the bus. The film is silent and cuts to black, which is honestly one of my favorite trends from films of this era. I feel like it gives the viewer an extra kick in the gut.

I’m still and always will be baffled that the MPAA rated this film “X”, due to the “shocking portrayal of prostitution, homosexuality, and use of nudity”. By today’s standards, there’s nothing shocking about this at all. And, looking at other films released around this time, it looks like the MPAA was just scared and angry about the use of homosexuality in a film. What bastards.