I was really excited for this film solely based on the cast. I was excited to watch Auli’i Cravalho in a live-action film, and I love Carol Burnett. Along with those two, the film also stars Judy Reyes, Justina Machado, and Fred Armisen, all actors I appreciate.. To say I was disappointed with this film is an understatement. Unfortunately, I ended up being rather annoyed.

All Together Now is based on the book “Sorta Like a Rock Star” by Matthew Quick. This is the same man who wrote the book Silver Linings Playbook, which should have been an indicator to me that I wouldn’t really like this film. Anyway, three different men worked on the screenplay and they still didn’t really hit the nail on the head in regards to portraying a teenage girl. Weird. 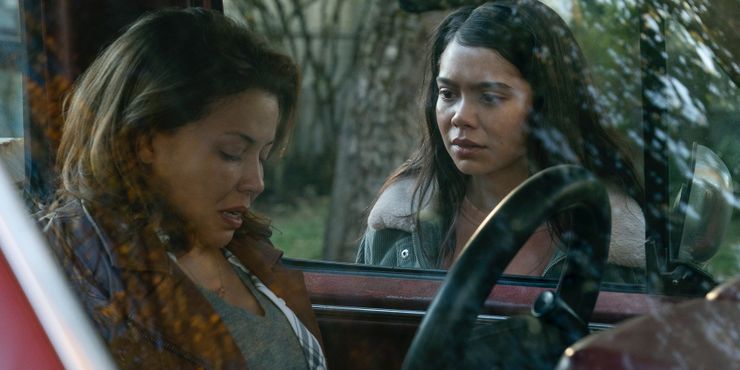 A brief summary: Amber Appleton has big dreams of going to Carnegie Mellon to pursue a degree in music. She works towards this dream every day by working hard in school, and having two different jobs, one at a donut shop and one at a nursing home. Amber struggles being homeless with her mother, who also happens to be a recovering alcoholic. In order to overcome certain hardships, she realizes that it’s okay to accept help from those that care about her.

The best way I can describe the overall feel of this film is that the filmmakers made a computer watch hours and hours of teen dramas, and then it produced a script, and the filmmakers were like “yes. We’ve done it.” Nothing felt flushed out enough. Every aspect of this film felt surface level: the characters, the scenarios, all of it, which was tremendously disappointing.

The run time of the film was just barely over 90 minutes, and that still felt too long. I really just wish this film would have either focused on the obstacles Amber has in her personal life, or her life with her friends at school, or her life with her best friend. It felt like too much was being done, too much was trying to be told in a very limited amount of time. Nearly all the actors (save for some of the teens) gave fine performances with what they were given to work with. Although, it did feel like Fred Armisen was acting in the first part of a sketch from Portlandia. Like, the joke hasn’t kicked in yet, but we’re getting to it, ya know? It was weird.

I kept waiting for the punch line.

Anyway, if you like films that are predictable and reminiscent of every other teen drama that seems to come out then, by all means, watch this film. Otherwise, skip this one. Rewatch The Office again.

The Graduate has one of my favorite film endings of all time. So, if you want to do a deep dive with me click the link in my bio and read about number 17 on AFI's 100 Greatest Films list.
It was absolutely mind boggling to see this in person. I've loved movies my whole life. I'd watch the Academy Awards every year. AND up until recently I worked in the very hotel this was held in. ⁣
The next time you watch a film that was made before the digital age, remember that those films were edited on these suckers.
Buster Keaton's The General continues to withstand the test of time, nearly 100 years later. ⁣
Feeling wicked? 💚🖤⁣
Honestly, I want a print of this hanging up in my house. #Movies #Films #Movie #Film #Cinephile #Cinema #MovieBlog #FilmBlog#Instaflicks #CinephileCommunity #History #FilmHistory #HollywoodHistory #moviebuff #historical #Classic #AcademyMuseum #CinematographeLumiere #Filmmaking #HistoryOfFilm #France #BirthplaceOfFilm #FilmHistory #filmcamera #europe #filmbuff
Loading Comments...
%d bloggers like this: