Written and directed by Remi Weekes, in his directorial debut, His House is a harrowing horror film about a refugee couple who have escaped South Sudan and are trying to assimilate into the UK in order to, hopefully, gain citizenship and create a better life for themselves. All the while, they are being haunted by their past and by the fear of losing their culture and who they are. Sope Dirisu and Wunmi Mosaku play the two main characters, Bol and Rial Majur, who seem to be haunted by a Witch, played by Javier Botet. Matt Smith rounds out the cast as Mark Essworth, the Majur’s caseworker.

His House is one of the better constructed films that I have seen in a while. The film beautifully covers the topics of immigration and assimilation, along with culture, identity and PTSD while blending in elements of horror throughout, creating an overall eerie film. Thought clearly went into the camera work. Right away, director Weekes connects us to the main characters with facial close-ups and some raw emotion coming from both actors. That connection stays constant throughout the film.

We soon see a couple divided. Bol is trying to fit in. He wants a better life in this place and feels that his best chance of gaining citizenship is to try and blend in. Rial, on the other hand, doesn’t want to blend in. She wants to be herself. She wants to wear her African clothes, not clothes from a shop in England. She wants to eat the way she has always eaten. She doesn’t want to use silverware.

On top of the stress of being a refugee and trying to immigrate to another country, we learn that the two also lost a child on their way out of South Sudan. She fell overboard, and Rial misses her terribly. She does not want to forget the child. Bol wants to start completely fresh. No reminders of the life they left. But, they both soon discover that they are being haunted by a Night Witch because of their past and what they are trying to escape. 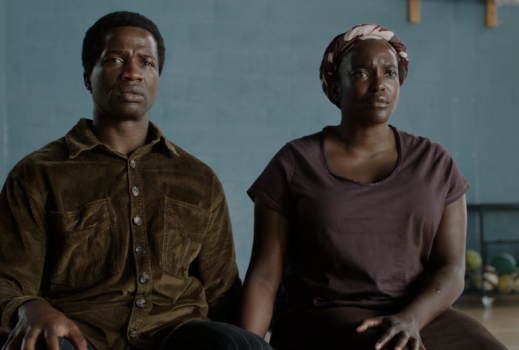 I cannot stress enough how wonderful Sope Dirisu and Wunmi Mosaku were. The emotion was raw and real. They played off each other perfectly.

But, what really makes this film stand out from others is the way the plot twists are revealed and the way the story is told. Repeatedly, we find ourselves in the character’s flashbacks, but those flashbacks blend with the reality around them. The film disorients the viewer, as well as the characters, and then quickly makes everything clear. I cannot express properly how well done this film is. How well Remi Weekes gets his message across. And how well Weekes portrays this story with some truly frightening imagery. It is truly masterful filmmaking.

His House is currently streaming on Netflix.