A criminal pleads insanity and is admitted to a mental institution, where he rebels against the oppressive nurse and rallies up the scared patients.

One Flew Over The Cuckoo’s Nest is considered, by many, to be one of the greatest films ever made. Directed by Milos Forman, the film stars Jack Nicholson as R.P. McMurphy, Louise Fletcher as the infamous Nurse Ratched, and Will Sampson as Chief Bromden. Based on the book written by Ken Kesey, One Flew Over the Cuckoo’s Nest was adapted for screen by Lawrence Hauben and Bo Goldman, making some rather significant changes to the source material.

I find myself conflicted with the change in the source material. The book is told from the perspective of Chief 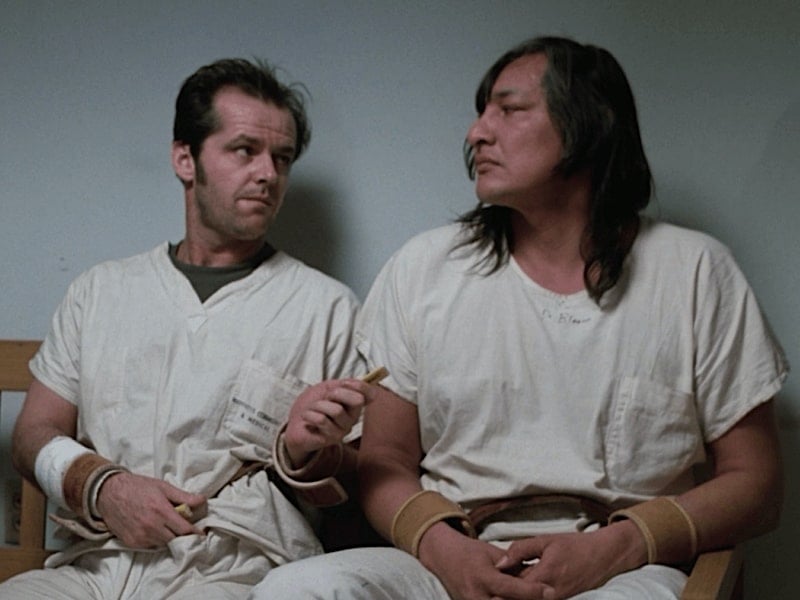 Bromden. He is the central character. The film, however, has R.P. McMurphy as the central character. This change is only made worse by the fact that we, the audience, are being made to sympathize with a man who is serving a prison sentence for the rape of a 15 year old. This is what has always baffled me: we are supposed to root for the literal criminal and we are supposed to root against the nurse who is seemingly just doing her job. That doesn’t seem right. However, don’t get me wrong. I am in no way defending the character of Nurse Ratched. I’m just saying that she isn’t the one who raped a 15 year old girl.

Let’s briefly talk about Nurse Ratched, though. She is often seen as the second-greatest villain of all time (just behind the Wicked Witch of the West). She is the head nurse in the psychiatric ward of the Salem State Hospital. She is the main authority in this bureaucracy and she is made power hungry. All the patients are on medication that will keep them at bay, such as antipsychotics or anticonvulsants, which makes all the patients easy to control. It also benefits her that all the patients are afraid of Nurse Ratched, as she uses her power to threaten those that become unruly. Once R.P. McMurphy is admitted to the psychiatric ward, however, Nurse Ratched sees her power as threatened. So, she does everything within her power to tear him down. She is ultimately successful in this, but McMurphy is also successful in destroying the threatening power she holds over everyone else. Strangely enough, Nurse Ratched brings the much needed cold to the warm-hearted psychiatric patients. She provides an excellent balance.

The two moments from this film that have stuck with me the most throughout the years has to be McMurphy’s realization that he has been committed to the psychiatric ward and cannot leave until they feel he is ready too, despite his prison sentence being up in just a couple of months and the full ending of the film. Both of these moments are executed with such grace and intensity. The former, perfectly portraying the dread McMurphy is feeling in that moment and the latter emphasizing the hopelessness of the entire situation.

One of my only critiques with One Flew Over the Cuckoo’s Nest would be to have Chief Bromden be a larger part of the narrative earlier on in the film. He does become important towards the end, but I don’t think it does his character justice.

Not only does this film give us a mere glimpse into the reality of treatments used in psych wards in the 60s (the film is fairly accurate), but director Forman portrays the chaos of the situation flawlessly. I do hope that, with each new iteration of this AFI list, that this film remains near the top.

If you really want to just watch a film that is a solid good time, I definitely recommend Nobody. ⁣
Flashback Friday! TBH, Rupert Everett is everything in this film. Who remembers watching this?
Giant monkey fights giant lizard with an amazing color palette surrounding them both. ⁣
The only thing that pulls me out of this film is how quickly Sam Spade and Brigid O'Shaughnessy fall for each other. What has it been? Like a day? ⁣
Look, all these group shots were cool. And the interaction between Batman and Joker was *chef's kiss*. I really just wish the whole film had that same tone and emotion that the Epilogue did. ⁣
Flashback Friday! I loved this film so much as a child. More than the first Flintstones movie they did. Ya know, the one with an entirely different (and arguably better) cast? ⁣
%d bloggers like this: