A seemingly timid but secretly ruthless ingénue insinuates herself into the lives of an aging Broadway star and her circle of theater friends.

You know, I don’t think there will ever be a time where All About Eve will be irrelevant. In powerhouse performances from both Bette Davis (Margo) and Anne Baxter (Eve), All About Eve follows young Eve as she inserts herself into the life of theater star Margo Channing and her high profile friend group. At first, we all think that Eve is this innocent small town girl who idolizes a big star and has dreams of one day being a big star herself. The reveal of the type of person Eve actually is is slow and steady but oh so worth the wait.

This film, written and directed by Joseph L. Mankiewicz, has some of the best quick witted dialogue for films of this time, without being delivered too fast. Everything was perfectly paced. Both Bette Davis and Anne Baxter give stunning 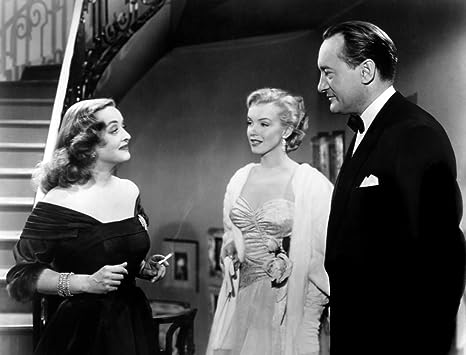 performances. Bette Davis comes at no surprise, however. Anne Baxter, on the other hand, wow. Her ability to go from playing sweet and naïve to being cutthroat and cruel is awe-inducing. I don’t think I’ve ever seen anything quite like it. Of course, George Sanders and Celeste Holm do well (the latter being more surprising simply because Davis and Holm did not get along. But, you’d never know it from their chemistry on screen). As does Gary Merrill, High Marlowe, and Thelma Ritter. The minor actress that stole the few scenes she was in was Marilyn Monroe, playing the role of actress Miss Casswell. She’s only briefly on screen, but she uses that screen time to her advantage.

Alfred Newman’s score for the film reminded me an awful lot of the score for Gone With The Wind in that it would be very grandiose at perfect moments. It’s an absolutely beautiful score and deserves a listen.

All About Eve feels like the studios telling on themselves. In this film, we see Eve begin to replace Margo, as Margo is now older

and may soon be a “has been”. The irony of it all is that the studios were doing exactly that. They were replacing their “old” stars with their “new” younger stars, by putting them in movies together or playing up on the “old” narrative in the press. The plot to All About Eve was exactly what was happening. And, as the ending of the film suggests, it was a cycle that would never stop happening.

This film could be remade today, keeping the writing exactly the same, and it would be relevant. With our culture of “internet celebrity”/ “influencers”, this plot can be seen anywhere in the city of Los Angeles. This film has stood the test of time and it’s all because of excellent writing.

This film should remain on every iteration of the AFI list of 100 greatest films. In fact, I’d argue that it should be higher up on the list than number twenty eight. The performances from all parties, alone, warrant that. Combined with the music and the writing, you have a film that has stood the test of time and will continue to for years to come.