Ferris Bueller’s Day Off is some of the best writing John Hughes ever did. Now, I know what you’re going to say: But, what about The Breakfast Club? And, I hear you.

This isn’t a conclusion that I’ve come to lightly. I’ve thought long and hard about this. And, after rewatching both films, I do think that Ferris Bueller’s Day Off has better writing for one reason: Cameron Frye.

It’s hard to think of another film where we see so much character growth from a character that is a supporting one. To be able to weave that in to the story and have it hit as strongly as it does is really something.

When we first meet Cameron, he’s “sick” in bed.

Ferris, his best friend, calls him to come over and join him on his day of playing hooky from school. Cameron is an anxiety ridden teenager who, throughout the film questions how good of a friend Ferris really is for putting him through all of this stress. As the film goes on, we build to the moment when Cameron realizes that his father, who we know to be a tough, strict, uncaring man from Cameron’s comments about him, will put it together that the car, the 1961 Ferrari 250GT California, the car that his father loves more than anything else in the world, has been removed from the garage and then later put back.

It is the moments following Cameron’s catatonic episode that we see some of the best character growth. We have one of the best moments in the film:

This is huge for Cameron. Just hours before, while at the Art Institute, he was observing Sunday Afternoon on the Island of La Grande Jatte by George Seurat. He was paying 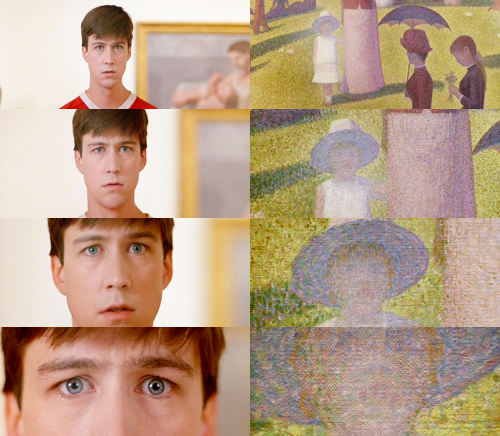 particular attention to the young boy. From a distance, he could see the full figure. But, as he looked closer, he sees less and less. He no longer sees a full figure, just a bunch of little dots. And his eyes show us his worry. Is he like that painting? Is he a full person from a distance, but the closer you get to him, the less he becomes? He goes through a real existential crisis in a very short period. And, yet, by the end of the film, he’s gone from a teenager to a man. And it all happens so swiftly and subtly. Honestly, that’s all due to Hughes’ writing.

What do you think was John Hughes’ best written film? The Breakfast Club? Planes, Trains, and Automobiles? Let’s discuss!

2 thoughts on “Ferris Bueller’s Day Off: A Brief Look at the Character Development of Cameron Frye”