In Africa during World War I, a gin-swilling riverboat captain is persuaded by a strait-laced missionary to use his boat to attack an enemy warship.

Never in my life have I seen a character more annoyingly frustrating in a film than Katherine Hepburn’s Rose Sayer in The African Queen. Look, her performance is great.

However, how Charlie Allnut, Humphrey Bogart’s character, doesn’t throw her overboard at various points is beyond me.  I get it. Her brother went bonkers after the German’s came in and destroyed the village where he preached. He died. However, at NO POINT does Charlie Allnut agree to build torpedoes and blow up the ship The Louisa. Like, when she states “You promised”, I audibly responded with “He absolutely did not.” Charlie is just trying to live his life on his boat, The African 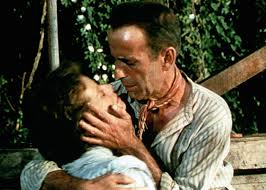 Queen. He does the decent thing of taking Rose with him once he discovers that their village has been burned to the ground, and from that moment on, she really seems to make his life a living hell. All of the trouble that Charlie goes through in the film is directly caused by Rose and what she wants to do. Honestly, my dislike for her character ruins Rose and Charlie’s romance in the film because I can’t see how anybody could love her. That sounds crazy mean, but it’s true.

ANYWAY, let me talk about something that isn’t how annoying Rose Sayer is. John Huston

does a tremendous job directing this film. It’s visually beautiful. And, Humphrey Bogart absolutely deserved the Best Actor Academy Award that he received for this film. I do know that this film was hell and a half to make. Everybody, save for Bogey and Huston, became sick. Supposedly, the only reason that Bogey and Huston didn’t get sick is because they pretty much only drank scotch whiskey. So, kudos to them, I guess. But, for all the hell that they went through, all in all, a pretty good film came out of it. It’s a solid action/adventure film IF you can move pass the constant irritation that is Rose Sayer.

What do you think? Is my opinion of Rose too harsh or spot on?

*If you would like to watch the film, it is (at the time that this blog was posted) currently streaming on Netflix.