A female girlie club entertainer in Weimar Republic era Berlin romances two men while the Nazi Party rises to power around them.

One of my absolute favorite things about movie musicals from the 1970s is that most of them explore sexuality in a way that movies before them did not. Cabaret

is no different. In fact, the exploration of sexuality is one of the main themes in this film. Let’s start with the character of Brian Roberts, played by Michael York. He’s not sure what he identifies as when we meet him. He reveals to Sally Bowles, played by Liza Minnelli, that he has only ever “gone through the motions of” being with a woman exactly three times. Sally comes to the conclusion that he’s gay, and they carry on with their friendship. However, about half way through the film, Sally and Michael sleep together, ultimately becoming lovers. Oh, but we aren’t done yet. They then both meet Maximilian von Heune, played by Helmut Griem. He begins to seduce, well, both of them. This becomes very clear during the dance scene at Maximilian’s estate. And, shortly after, it is revealed that both Sally and Brian had been sleeping with Maximilian.

Brian Roberts and Maximilian aren’t the only examples of explored sexuality in the film. Throughout we do see, at the Kit Kat Klub, a cross-dressing man, as well as The Master of Ceremonies playing with gender. It’s genius.

One of my favorite things about the film Cabaret is that all of the musical numbers take place in a musical setting, unlike the actual stage musical. With the tone that this film has, I do think that that was such an important and smart call to make. All the songs sung at the Kit Kat Klub reflect what is happening in the story. “Money” occurs on stage just after Sally and Brian find out that Maximilian is a Baron. “Maybe This Time” occurs after Sally and Brain sleep together. And “If You Could See Her” is sung right after it is revealed that Fritz Wendel is actually Jewish, and he has to tell Natalia, the woman he is in love with, because she is also Jewish.

I want to take a quick moment to talk about how chilling the song “If You Could See Her” actually is, and it’s all only due to one line. The whole song seems lighthearted.

The Master of Ceremonies is singing to someone who is dressed up in an ape costume, with lines like “How can I speak of her virtues? I don’t know where to begin! She’s clever, she’s smart, she reads music. She doesn’t smoke or drink gin. (Like I do.)” Then we get to the end of the song. Now, up until this point the audience is aware of the rising power of the Nazi party in Berlin, although it’s merely an undercurrent in the story. We are then reminded of the turmoil the country is in with the last line of the song; the Master of Ceremonies looks lovingly at his ape, and then back at the audience while singing “But if you could see her through my eyes, she wouldn’t look Jewish at all.” And that is honestly one of the more horrifying  moments in a movie musical that I have ever seen. To really show the state and mindset that the people of Berlin are in at that time, The Master of Ceremonies likens a Jewish person to an ape. And he’s met with laughter.

Having the Nazi party takeover of Berlin as an undercurrent to the main story of Sally Bowles is genius. It creates an ominous feeling throughout the entirety of the film. We, the audience, know how this all played out. We know the heartbreak and cruelty that is still to come. And we are helpless to do anything about it. We must simply watch it happen. One of the other more chilling moments in this film is the scene in the beer

garden. A young man stands to sing the song “Tomorrow Belongs to Me”. The camera focuses on the young boys face, and his wonderful singing voice before panning down to reveal that Nazi garb that he is wearing. The song begins nice and light, but, as it goes on and more people stand and join in, “Tomorrow Belongs to Me” becomes much more like a Nazi march than a light ballad. With lines like “Oh fatherland, fatherland, show us the sign your children have waited to see. The morning will come when the world is mine. Tomorrow belongs to me”, the song takes on an incredibly chilling tone. Up until this point in the film, the Nazi party isn’t seen as a serious threat by the citizens of Berlin. The audience hears that stated in varying ways multiple times throughout the film. It’s at this point that we all know, the Nazi party has a hold in Berlin, and they aren’t letting go.

This, ultimately, leads us up to the very last scene in the film. After Sally is done singing “Cabaret” and the Master of Ceremonies has left the stage, we see a shot that is very reminiscent of the opening shot of the film. We see the reflection of the audience through some paneling. However, this time we see that there are more Nazi soldiers in the audience. The Nazi party has become accepted in the city of Berlin, partly by force and partly with open arms. As the camera pans over the reflections, it’s silent. And then nothing. The end. It leaves the viewer with a very ominous feeling.

Okay. Enough about the story itself. What about the performances?

I’m going to be honest: the whole first half of the film, Liza Minnelli’s portrayal of Sally

Bowles annoys the hell out of me. She’s so over the top, and some of the stuff that she says is just so cringe worthy (ie “Doesn’t my body just drive you wild with desire?”). That being said, from the moment she discovers she’s pregnant till the end of the film, that performance I like.

That’s not to say that her 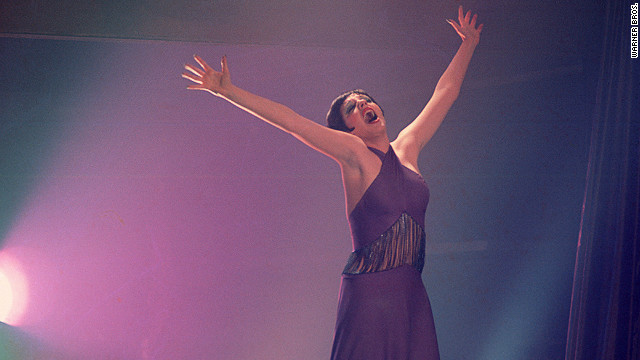 portrayal of Sally Bowles is bad. It’s just so damn over the top. But, that’s the character, I guess. Her performance of the final song “Cabaret”, though, is one of my favorites. There’s just so much emotion being portrayed in that one song.

Michael York’s performance as a man questioning and exploring his sexuality throughout the film is wonderful. He plays Brian Roberts with a touch of innocence, but also great passion. It’s a careful balancing act that Michael York nails.

Lastly, there’s Joel Grey’s performance as The Master of Ceremonies. His is, by far, my favorite in the whole film. We only see him at the Kit Kat Klub, but I desperately want to know more about his character while watching the film. He’s so enticing.

This is a film that I recommend to those that aren’t really the movie musical type, solely because the music doesn’t feel as out of place because all the songs are performed within the cabaret. It feels more natural. And that seems to be the problem that the people who dislike movie musicals have most: that the singing and dancing that occurs within everyday conversation feels awkward. This isn’t really the case with Cabaret. And, the drama of the story is just an added bonus. This film absolutely deserves to be on AFI’s 100 Greatest Films Over 100 Years list.