I don’t know that I’ve ever seen a coming of age film that’s as raw as Bo Burnham’s Eighth Grade. It perfectly portrayed some of the rougher, more awkward parts of growing up, and depicted them accurately, which is the biggest achievement.

Elsie Fisher plays Kayla, a teenager in her last couple weeks of eighth grade. We follow 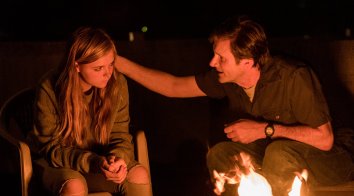 her through some of the more cringe-worthy parts of growing up. I can’t emphasize enough how accurately depicted so much of the film is. Certain situations, like the pool party and the scene with Kayla and Riley in the back of the car really hit home for me. I was immediately transported back to my awkward self in middle school and how anxious and nervous I was all the time. It evoked very genuine emotions from me.

I like the commentary throughout the film about social media and the impact it has on young adults. That’s something that wasn’t really around too much when I was in the eighth grade, save for Myspace (RIP). It’s something that we are all aware of, how social media can effect literally anybody mentally. That impact, I think, goes double when you’re still trying to figure out who the hell you are at the tender age of thirteen.

This is Burnham’s directorial debut, and I think he does a pretty solid job. There’s a lot of interesting shots used throughout the film. There’s also the, what I think is, deliberate choice to not have lines delivered perfectly. There’s a number of times Kayla stumbles over her words, as does her father, Mark. It was refreshing because people do not speak perfectly in real life ever. People stumble over their words all the time. It helped to make this film feel very real.

And that’s how this film felt. It felt real. It felt authentic. And I recommend it to anybody of any age, because we all went through this. Every single one of us.

Honestly, I'm still thinking about The Searchers. Justice for Look. She deserved SO much better.
We all know my general feeling about Westerns at this point, right? I watched number 12 on AFI's list, The Searchers. And, well, just read the post. There was a lot to discuss. ⁣
Show of hands: who saw Doctor Strange in the Multiverse of Madness this weekend? What did you guys think? Head over to That Old Picture Show and check-out my full review! ⁣
Have you guys seen Licorice Pizza? What did you think? Because I was unbelievably disappointed by it. Head over to That Old Picture Show to read more of my thoughts on Paul Thomas Anderson's latest film. ⁣
I haven't stopped thinking about the deleted "Green Green Dress" scene that was released. I had to get my thoughts out. Click the link in my bio!
Coming in at number 13 is 1977s Star Wars. Head over to That Old Picture Show to read my post about the iconic film. And, if you're in the Los Angeles area, head over to the Academy Museum to checkout some of the Star Wars movie memorabilia they have!
Go to mobile version
%d bloggers like this: