I’m just going to say it: this is my favorite Disney animated film. It was my favorite growing up and is still one of my favorites today. So, pardon me if this entry is a little bias. I’ll try my best not to be.

Alice in Wonderland was released in 1951.Disney released four other animated films in that decade: Cinderella in 1950,  Peter Pan in 1953, Lady and the Tramp in 1955, and Sleeping Beauty in 1959. Now, you could probably argue that, out of all five films that came out in that decade, Alice in Wonderland was the least memorable, right next to Lady and the Tramp. In fact, if it weren’t for the Disney parks actively having rides and mazes revolving around the film, I don’t know that you would see merchandise from the film or if those Tim Burton films would have ever happened (the latter would have been a good thing).

The animation for the film is beautiful, just like the others released during that decade. This really was made at the original height of Walt Disney Animation.

The music heavily uses the Disney Chorus, as did most during this time period. Although, when compared to others, this film is lacking in music. It doesn’t have a song that is crazy memorable like “A Dream is a Wish Your Heart Makes” or “Once Upon a Dream”. If you haven’t seen the film in a while, I’d bet that you wouldn’t really remember any song past “I’m Late” (which hardly counts as a song) and “The Unbirthday Song”. The music just never really has that defining “Disney” moment.

liberties with Lewis Carol’s original books. The silliness factor is ever present with the Mad Tea Party and Tweedle Dee and Tweedle Dum. I particularly like when Alice is lost in the Tulgey Wood because of all the different creatures that surround her. I will say, though, 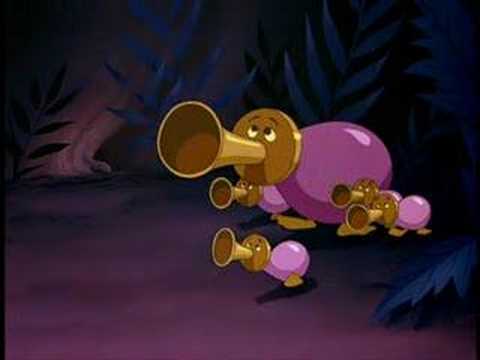 that watching this film as an adult is quite frustrating because as Alice does something, like drink a bottle that states “Drink Me” and nothing else, she is talking to herself about why she shouldn’t do it. Of course, this is all to lead up to the line “I give myself very good advice but I very seldom follow it” so, I mean, at least the girl is self-aware.

All in all, it’s a good film. Like I said, the animation is beautiful, and the music is fun. Is it the best that Disney ever did? No, of course not. But, it’s one that’s been very near and dear to my heart for a long time and will continue to be.

One thought on “Revisiting Disney: Alice in Wonderland (1951)”