My Netflix queue has had pretty much the same movies on it for years. I, like most people, will search and search for a movie to watch, and then settle on watching an episode of The Office or 30 Rock or That’s 70s Show, all television shows that I have seen over and over again. So, I thought it would be fun to go through my queue once or twice a week, pick out a film, watch it and then write about it.

The Invitation is a film that I have heard a lot about over the last couple of years. I actually began watching it months ago, but soon discovered that my body was incredibly tired and I fell asleep. This time, however, that was not the case. And I am so happy that it wasn’t because the last twenty or so minutes of this film goes berserk.

This film is a 2015 psychological horror film directed by Karyn Kusama and written by Phil Hay and Matt Manfredi. I knew nothing about what to expect from the film, except that it was a slow burn, much like The Witch, and I am all for slow burn horror. The

Invitation begins with our main character, Will, played wonderfully by Logan Marshall-Green, and his girlfriend, Kira, played by Emayatzy Corinealdi, traveling to the home of Will’s ex-wife for a dinner party. Along the way to the house in the hills of Los Angeles, the two accidentally hit a coyote with the car. The hit not quite killing the coyote, Will puts the poor animal out of its misery with a tire iron. From here we go to an unsettling dinner party at a house with many locked doors and bars on the window. This very much emphasizing a caged animal feeling.

Throughout the film, we learn that Will and his ex-wife, Eden, played by Tammy Blanchard, had a son, who died suddenly on his 5th birthday. We also learn that Will and Eden have dealt with that loss very differently since their split: Will not really dealing with it at all, and Eden dealing with it by joining a cult called The Invitation. As soon as the cult aspect was introduced, the film became fairly predictable. But that didn’t take any of the suspense and tension away. If anything, I feel that it created more because you could guess what was going to happen and it was nerve-racking. 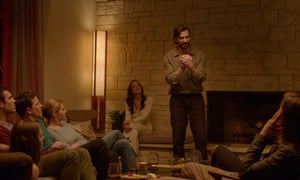 There was a specific color palette chosen for this film. The entire film is filled with muted colors. There’s a lot of tans and olive greens. Even during the dinner scene, the food matched this color scheme. I can only guess that this was chosen to create a sharper contrast when everything went haywire and the deaths began to happen. Blood is always more shocking when shown on a muted color palette.

One of my favorite things about The Invitation is the use of tones throughout the opening that you barely notice are there. They are there to give you that sense of uneasiness. Those tones come back during the dinner scene when Will is flashing back to the death of his son. The editing follows suit with disorienting cuts and sped up frames. It really visually expresses the feeling of insanity that Will is experiencing at that moment.

chilling. I was going to say that it was shocking, but that’s not the right word. I live in Los Angeles, and I find it eerily believable. I mean, in the 1920s, there were nearly 400 active cults in Los Angeles. It’s a breeding ground for that sort of thing. The chilling aspect of the ending was the sounds of sirens and helicopters. That, coupled with the visual of the red lanterns, knowing that similar scenes played out in all of those houses, that is what’s chilling.

Honestly, I’m so mad at myself for not watching this film sooner. I can now remove it from my Netflix Queue and add it to my “You need to watch this movie” recommendation list.