When the lights came up, I was silent. I did not know how to feel. I put my apprehension about the film aside so that I could get the whole experience. There was a man sitting catty-corner to my friend and I who, throughout the film, would laugh at questionable moments. At the end of the film, he said “aw yeah. He killed that bitch”, referring to the female psychiatrist who asked Arthur Fleck “what’s so funny?” and who was just doing her job. And, honestly, it was this man who helped to solidify my fears about this film.

Reviewing the notes I took right after Joker ended, it appears that there are only three

good things on the list and they are listed at the top because the more I thought about the film, the more put-off I was. So, I will start with what I felt was good. The overall aesthetic of the film I found pleasing. Joaquin Phoenix did a fine job (but not the best, which I’ll get into a little later). I enjoyed the music choices, but I do wish that Frank Sinatra would have been left out of it. I also wish a Gary Glitter song would not have been used during a pivotal moment in the film. That, my friends, is where my positive list ends. 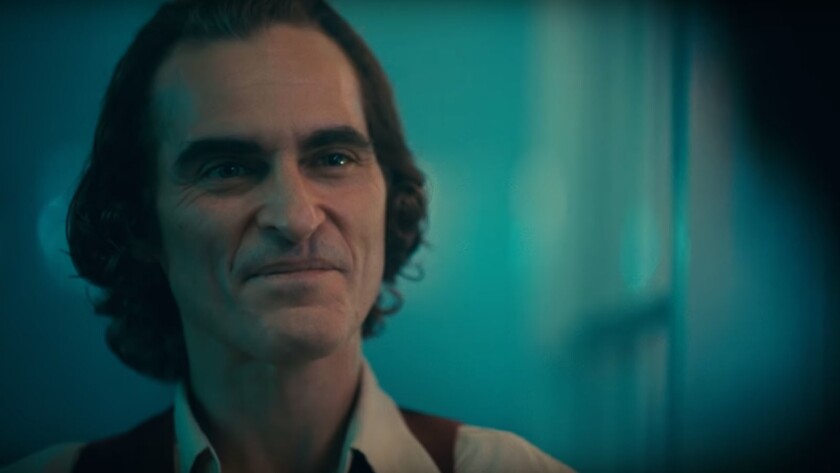 main character. No, I don’t know men who a commit mass murder, but I know men who have a similar thought process to Arthur Fleck, as a lot of women do, and that is scary. It hit too close to home. In regards to the film humanizing the Joker, it felt pointless. The screenwriters use Arthur’s relationship with his mother and use the bullies in his life as a way to attach us to this character. They are used as a way to make us feel sympathy to an  otherwise unsympathetic person. Then, once Arthur discovers that he was adopted and that his mother wasn’t this saint he thought she was, he proceeds to kill her in the hospital, effectively undoing any humanization that had been done. The problem is that there were already people who related to the Joker before this film even came out, and it hasn’t deterred any of them.

Joaquin Phoenix’s performance as Arthur Fleck/ Joker, if I’m being entirely honest, is not the best Joker performance that I have ever seen. The mark of a solid performance, in my mind, is when the audience forgets the actor portraying the character and only sees the character, i.e. Heath Ledger’s performance in The Dark Knight. Not once did I forget that I was watching Joaquin Phoenix on screen. His performance, although good, translated to little more than him just being himself with a slightly more crazy than usual.

Story-wise, it wasn’t anything impressive. Joker felt like Todd Phillips throwing a temper tantrum because he’s not seen as “funny” anymore, when the reality of it is that Phillips doesn’t know how to be funny without perpetuating racist and sexist stereotypes, and people have had enough. He was unable to grow with the times, so he has written and directed a big, bold statement of a film.

I don’t know if the social climate would ever be in the right place for this film to be released. I get that the film wanted to be different from previous Batman universe films before it, but then why even include the Wayne’s? That makes no sense. First, we do not need to see Bruce Wayne’s parents die AGAIN. We have seen it a thousand times over. Second, the age difference really bothered me between Joker and Bruce Wayne. Bruce Wayne is in his 30s by the time he is fighting the Joker. That is at least 20 years from this film. Arthur Fleck is clearly older than 30. Am I really supposed to believe that the Joker is around 50 or 60 years old by the time he is fighting Batman? Please. That’s why

including Thomas Wayne in the narrative was superfluous. It created a timeline that made absolutely no sense. The inclusion felt forced. It felt like storyline was put in the film solely to make the audience remember that this is a film related to the character of Batman and to villainize the Wayne family as another way to justify the Joker’s terrifying behavior. This way, when Thomas Wayne and his wife die, the audience does not sympathize with Bruce Wayne because they’ve seen how horrible his father is. I should not have to repeat this as much as I have, but an audience should not be relating or finding attachment to a character who is a dangerous mass murderer.

How this film has received such high ratings is beyond me. Save for a semi-compelling performance by Joaquin Phoenix, it was nothing special. Honestly, it’s a movie that the world would be no worse off not having.

*All photos property of Warner Brothers