Anybody that knows me knows that I am a sucker for anything to do with abandoned insane asylums. What that says about me, I am not completely sure. You figure it out. Anyway, keeping that in mind, the 1999 remake of House on Haunted Hill greatly improves upon the original 1959 film.

1959’s House on Haunted Hill is a classic. Starring Vincent Price, the film takes place over the course of one night. Price’s character Frederick Loren, a millionaire, is throwing a 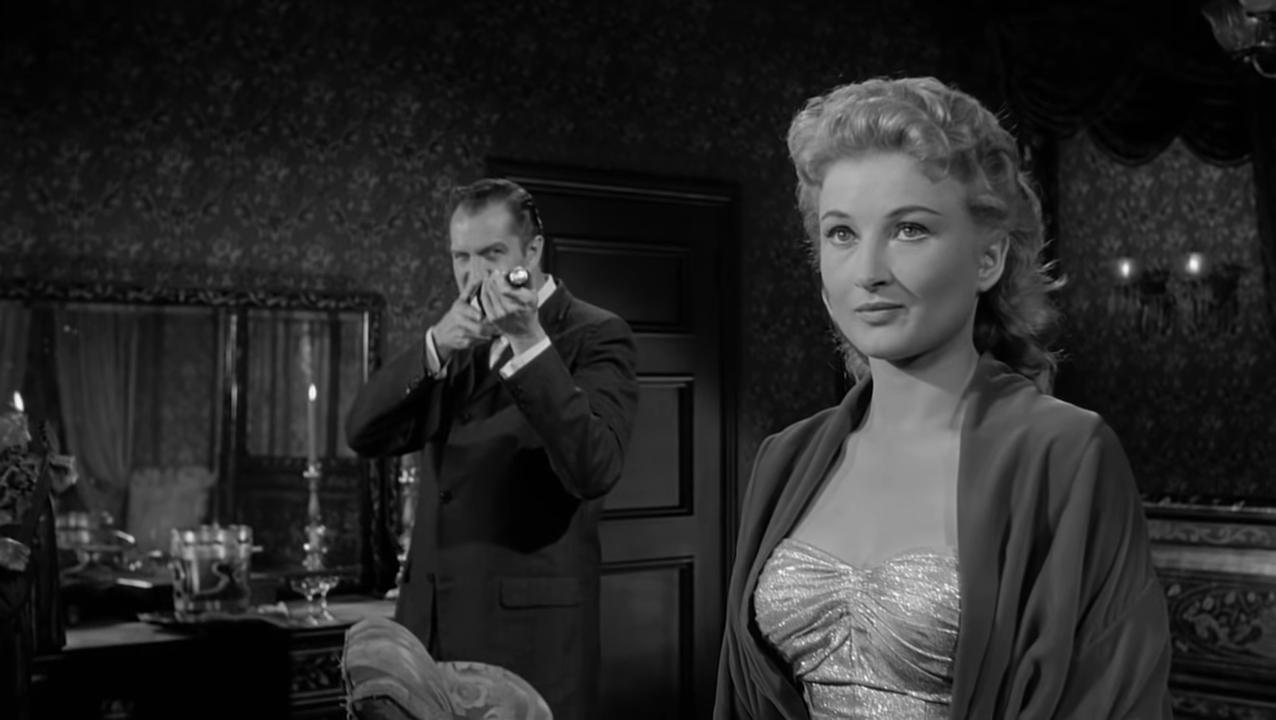 party for his wife. He has invited five strangers and has promised them each $10,000 if they stay the entire night with him and his wife in a supposedly haunted house. His wife’s real motives behind the party are soon revealed. Turns out she wants to kill her husband so she can have his money and run off with her lover. Frederick’s real motives are then revealed, as well. He was anticipating his wife trying to kill him, so he’s working to kill her. Honestly, there has to be a better way for these two to end things because this is exhausting. House on Haunted Hill, although having some scary elements to it, feels more like a mystery than a horror film. There’s witty dialogue and Price plays one hell of a madman, but the pacing feels off.

The 1999 remake by the same name takes those same story elements from the original film and adds to them. Geoffrey Rush plays Stephen Price, an amusement park mogul,

who plans a party for his wife’s birthday. His wife, Evelyn, played by Famke Janssen, chooses a house with disturbing past. Here, we learn later, is where she wants to commit the crime of having her husband killed, taking his money, and running away with her lover. Much like the original film, the same twist is there: Price knows that Evelyn wants to kill him, so he plots to be able to kill her first. However, things begin to go haywire almost immediately. All the wrong people are invited. Evelyn and Price don’t know any of them (or so they say). From here, creepy things start to happen and people begin to go missing. Pritchett (Chris Kattan), the gentleman whose family owns the house, tells the group of the house’s past, how it was at one time the Vannacutt Psychiatric Institute for the Criminally Insane, run by the sadistic Dr. Richard B. Vannacutt. The group is told of the immense amount of negative energy that’s there. The negative energy that is let free by Stephen Price and swallows nearly everybody with it.

The remake captures my attention much more than the original. Again, that may be due to my affinity for insane asylums or it may be that adding more to the story has grabbed my attention. There’s more to play with as a filmmaker and it keeps the story interesting. Keeping the basic story and story structure was smart on the filmmakers part for 1999’s House on Haunted Hill. The soundtrack to the film is very “90s Horror Film”, but the actual score adds enough of a classic horror film touch. ‘99’s version recognizes that the ending  of its film is ridiculous, that it goes absolutely haywire. Pritchett dies by being swallowed by the darkness and then proceeds to save Eddie and Sara (Taye Diggs and Ali Larter) from certain death. Let me say that again: Ghost Chris Kattan comes back to save Taye Diggs and Ali Larter from a what looks like just a mass of aggressive smoke. And, the film ends with corniness, with a little zinger as the credits roll. But, save for the ending of the film, the addition of the backstory for the house I think was necessary.

Although, it does really bother me in the 1999 film that they keep referring to that place as a house. Bro, it was a freaking mental hospital, okay?