The Wachowski’s had a very specific vision for their science fiction action film The Matrix. It’s a look that has inspired the look of sci-fi action films that followed. It’s also a

look that has been parodied countless times. Which does, at times, make it hard to take the film completely seriously when watching it now. But, once you get past that, you are left with a film that has aged fairly well, which can’t be said about most action films from the 90s.

For those unfamiliar with this film, it’s currently streaming on Netflix. So, take advantage of this stay-at-home order that’s in effect for most of the country and watch the film. I have very few problems with it. The only issue I have with the film itself has to do with the love story between Neo and Trinity. To me, it feels very forced. It feels tacked on. It feels like an easy solution to the problem the film has created for itself. It feels cheap and feels like cheating. I also didn’t feel like there was much chemistry between Keanu Reeves and Carrie-Ann Moss, which contributed to the forced feeling. 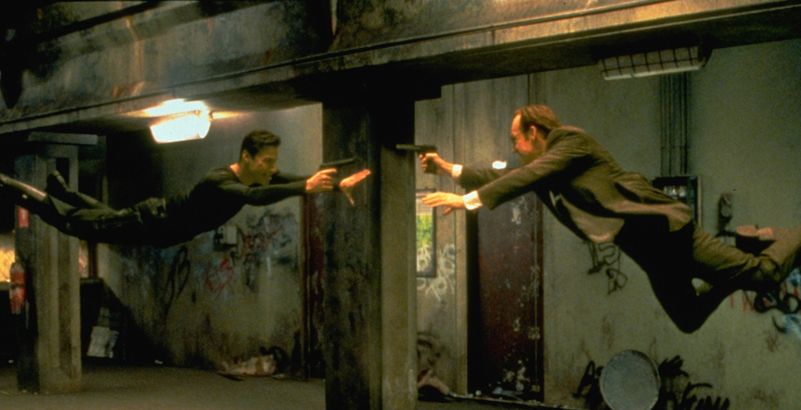 Other than that, as I said, I have very few problems or criticisms in regard to this film. It’s aged well. The main female character actually dresses properly for fighting. The fight choreography is unmatched by any other American film at this time. The green filter placed over the film, although overused today, was fitting at the time.

The only other notes I have on this film are:

Bald Keanu Reeves freaks me out. He just doesn’t have the head for it. And, when your hair is that good, why get rid of it.

Lastly, when presented with the option to take the red pill or the blue pill, I’m definitely choosing the blue pill. Interpret that however you like. All I know is, your girl has an anxiety disorder and, much like Truman Burbank, I accept the reality that I am presented with, with very little questions asked. Because the other option would kill me, anxiety wise. Sometimes ignorance really is bliss.