I’ve been on an “end of the world” movie kick lately (gee, wonder why?). And, if you haven’t noticed, the 1990s are filled with end of the world movies. And 1998’s Deep Impact is currently streaming on Netflix.

For those unfamiliar with the film, it’s about a comet that is going to hit the Earth and cause an Extinction Level Event. The United States knows about this and spends time (before telling the American people or other countries about it) building a large underground shelter and stocking up on supplies. Téa Leoni plays the reporter who busts the story wide open. Morgan Freeman plays the President of the United States and Elijah Wood plays a kid who discovered the goddamn comet in the first place. Robert Duvall is also among the cast of this film. He plays an astronaut who is sent on a mission with several others to attempt to destroy the comet before it hits Earth. Funnily enough, when they try to destroy the comet with nuclear weapons, they end up breaking the comet into two pieces. I laughed so goddamn hard. Because of course that’s what happened.

sorts. 800,000 Americans will be randomly selected via social security number. They will be the lucky ones who get to survive in the underground bunker. It should be noted that anybody over the age of 50 is automatically not included in this lottery. Which feels cold blooded but, at the same time, I get it. Ultimately, only the smaller comet collides into the Earth, completely destroying New York City and the surrounding area. The larger comet, thanks to the quick thinking of Duvall and his team, is destroyed before entering the atmosphere.

I find it hard to believe that, after all this, Americans would be so forgiving to their government. Only 800,000 people selected, every one over the age of 50 disqualified. I can’t help but think that Morgan Freeman’s president would not be reelected.

Leo Biederman is one of the dumbest high school boys I think I have ever seen in a film. Yes, he’s traditionally smart. But dude marries the girl he’s crushing on to save her and 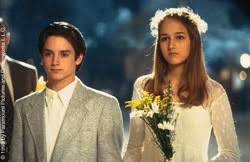 her family because he’s been preselected to be in the bunker. Not only is everybody in both families on board with this decision, but Leo’s parents support his decision to not go to the bunker and, instead, go back and save his now wife. She chose not to go with him because her family could not go, and SHE’S IN HIGH SCHOOL. The whole plot revolving around these two just feels like the filmmakers were told that there needed to be a love story of some sort in the film. You know, to attract the womenfolk. And then the filmmakers slapped this on. Whether it was there originally or not, it’s unnecessary and just bad. It’s bad. Bad writing. Bad everything.

So, if you’ve become comfortably (or uncomfortably) numb like I have to everything that’s going on outside our doors, and want to watch a no brainer end of the world film, might I recommend turning off your sixth rewatch of The Office on Netflix and switch over to Deep Impact, where you’ll sit there, uncomfortable about every decision every adult makes in the film.