Even though the film Heat was released in 1995 and uses some dated technology, the film itself is weirdly timeless. For those unfamiliar with the film, Heat is about a group of bank robbers who unknowingly leave a clue at their last heist and are beginning to feel the heat from the police. Hence, the title.

Written and directed by Michael Mann, Heat could easily be a masterclass on screenwriting. Mann, along with the help of the very talented cast, doesn’t really seem to paint any of the  characters as a “bad guy” (save for Waingro). Yes, obviously those doing the bank robbing are in the wrong, but there are so many moments where it does not seem that way. The best example I can give is when McCauley, played by Robert De Niro, and the rest of his crew are robbing a bank. McCauley makes it a point to say that they are there for the banks money, not the customers, and if anybody feels sick or has heart trouble, they can lean up against the wall. That moment extremely manipulates the viewers feelings in regards to what the characters are doing. That moment, like several others in the film, shows us that our bad guy, McCauley, has a moral center, which is unusual for your villain. But, he’s not really a villain, is he? 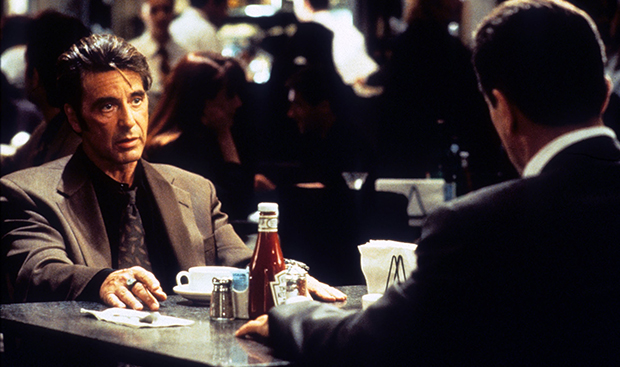 Arguably, the most famous scene in this film is the scene where Lt. Vincent Hanna, played by Al Pacino, sits down to have a cup of coffee with the man he is pursuing, Neil McCauley. This is where lines between good and bad become even more obscured, as both men realize how much they have in common. Both are vehemently dedicated to their jobs, regardless if that job is a lifetime criminal or a lifetime cop. But, even though they seem to like each other, and under any other circumstances would probably be friends, both make it very clear that neither will hesitate to take out the other if and when the time comes. So much tension is in this scene, with just the sounds of the restaurant in the background. This is due, equally, to great writing and great acting.

Now, speaking of acting, I do have one opinion about it in regards to this film. I think Robert De Niro does a better job of becoming a character than Al Pacino solely because Al Pacino still gives his signature delivery style in this film. The best example?

It’s moments like this where I am suddenly pulled out of the film and made very aware that I am watching a movie starring Al Pacino. Michael Mann did a very good job on directing this film. His choice in a cooler color palette is something that I like. The film takes place in Los Angeles, California which, on screen, is usually bright and warm and welcoming. Mann chose to go in the opposite direction, which fits the overall feel of this film. What I appreciate the most from Mann’s directing in this film is how clear and concise the big shoot out scene is after the bank robbery. So often, when a film has a bunch of characters, things can get lost in translation when there’s big action sequences. It can become difficult to keep up with each character when everything is chaotic and fast paced. Mann manages to avoid the confusion, making it clear to the audience what’s going on, who shot who, who’s in trouble, and so on.

The final scene of the film, much like the scene in the restaurant, is so full of suspense and tension with no additional music. All we hear is the noise of the airport and then the gunshots. It’s perfectly executed.

I stated in the beginning that even though this film uses dated technology, at no point does the film itself feel dated. I mean, this film is 25 years old and it feels like it was made within recent years. Heat is a film that can be watched over and over again, and each time I will have a new appreciation for it. Honestly, if AFI redoes it’s list anytime soon, I’d be so bold as to say that this film should have a place on it. You know, maybe replace one of the ten Westerns on the list. Just a thought.