I was finally able to watch the 2019 remake of Black Christmas. I thought it was only fair, as with most remakes, to look at the film as its own entity, separate from its namesake. So, that’s what I did. I sat down and watched the film, not thinking about the original 1974 film. And, even looking at this 2019 film as its own thing, the film was still garbage.

Now, I know what you’re thinking: but, Kristen, garbage? Really? And to that my answer is, yes, that may be a harsh way to describe the film, but I stand by it. Let me tell you all the reasons why.

If you’ve been with me for a while, you’ll know that one thing I very strongly dislike is a filmmaker being so painfully

obvious with the message of their film. I very much do not like to be beaten over the head with something so clear. Well, writer April Wolfe and writer/director Sophia Takal do exactly that. The message of the film was quite clear right from the beginning via some rather cringe worthy dialogue. Overall, Wolfe and Takal seemed to put more emphasis on  their message, than the actual plotline of the film. They essentially made the plot fit around the message, instead of cleverly writing it in and making the two seamlessly blend together.

I am a feminist. I agree with everything this film was saying. However, I don’t agree with how it was done. At one 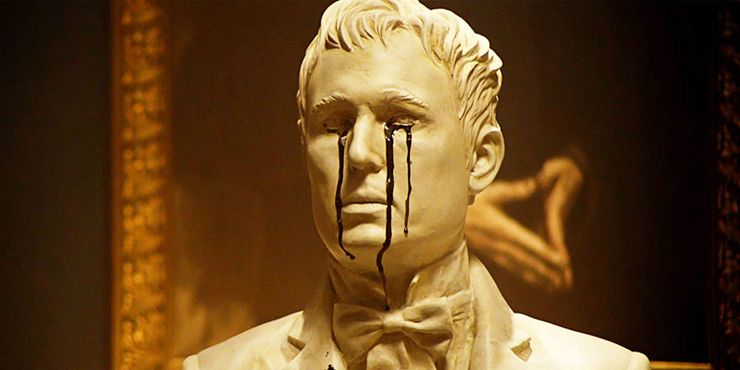 point a character even says “Not all men” and when I tell you I rolled my eyes the hardest I have ever rolled them, I mean it. This film just tries so hard to be “female”, and I’m not saying that that’s a bad thing, but when the way you want to make sure people know that this is a film made by women is by mentioning a vibrator and a diva cup within the first ten minutes of your film, I’m going to take issue. Again, I take issue with any film that underestimates its audience and their intelligence. And, this film does exactly that. For goodness sake, the black liquid that leaks out of the men (in place of blood) is literally the visual for toxic masculinity. I rolled my eyes again as I wrote that sentence. It was easily the most heavy handed metaphor I have ever seen. And, it didn’t need to be.

The biggest reason, aside from the LITERAL toxic masculinity, that the liquid seeping from the men in the film is black, is to avoid an “R” rating, which I honestly don’t think was a good move. The original film and even the 2006 remake that we should never speak of are rated “R”. In order to try and reach a larger audience, Takal decided to take this route, to make the film PG-13. Unfortunately, that just allowed more people to dislike the film (I’m looking at you 31% Rotten Tomato audience score).

There are ways to reclaim this subgenre of horror and flip the narrative. There have been a number of films that have executed that properly, from the entire Scream series to Hush and You’re Next. There are ways to be empowering to women in this genre that has generally been rather cruel to them. But, this way was not it.

version of “Up on the Rooftop”. The only thing I liked in this film was that rewritten version of that song. I thought that was clever. However, the scene was meant to be a dig at the film Mean Girls as Sophia Takal views that film as heavily misogynistic. Therein lies my problem with that scene. Mean Girls is not a perfect film, by any means. But, it is a film that, at the time, was doing the right thing, and was more progressive for women than most teen comedies. Yes, women are pitted against women, but not once in the film is that rewarded. In the end, the group of high school girls realize their wrong doings and grow as people. That’s the point. Plus, it’s literally a film about the dynamics of high school. So, in Black Christmas, a film that is pro-women, I felt that it was incredibly petty to take such a jab at another film that was written by a woman, based on a book written by a woman, produced by multiple women, casted by women, edited by women, and primarily starring women. I felt that the commentary was unnecessary and that it ultimately negates part of the overall message Sophia Takal was conveying.

If want to watch Black Christmas, I recommend that you stick with the original 1974 film. After all, it was progressive in its own right in regards to abortion just one year after Roe v. Wade.

And, if you’re curious about the rewritten “Up on the Rooftop”, see below.

There. Now you don’t have to watch the film.