Two Americans searching for work in Mexico convince an old prospector to help them mine for gold in the Sierra Madre Mountains.

Written and directed by John Huston, The Treasure of the Sierra Madre stars Humphrey Bogart, Walter Huston, and Tim Holt as three men looking to strike gold in Mexico. But, the film easily becomes about the corrupting influence of greed. Bogart plays Fred C. Dobbs, an American down on his luck in Mexico, looking for anyway to make or get a buck. Tim Holt plays Curtin, a friend of Hobbs’, and Walter Huston plays Howard, an experienced prospector who has burned through his money many times before, stating that you always want more.

I did not expect to like this film as much as I did, if I’m being honest. I’ve never been a big fan of John Huston’s, whether it’s his writing or directing. But, seeing as this film comes in at number 38 on AFI’s Top 100, I had no choice but to watch it, if I ever want to make it through this list. Surprisingly, though, I liked the writing in this film very much. The dialogue just flowed so easily between the three men. Each man’s performance was astonishing, as well. This is easily the best acting I have ever seen from Humphrey Bogart. I very much enjoyed Walter Huston’s acting in this film, as well. And, that was a surprise to me, seeing as I’m not a fan of either Huston’s acting, John or Angelica.

I mentioned above that The Treasure of the Sierra Madre isn’t so much about these men prospecting for gold, but more so about how the want for the gold seems to change them. Dobbs’ is more changed than the others by his want for gold, but his character is in question from the very beginning of the film. We aren’t entirely sure if he is a “good” man, and we know that when he does get any money at all, it is usually spent on alcohol and lottery tickets. So, one could argue that he’s not necessarily changed by the gold, as much as the gold brings his true self forward. It’s clear 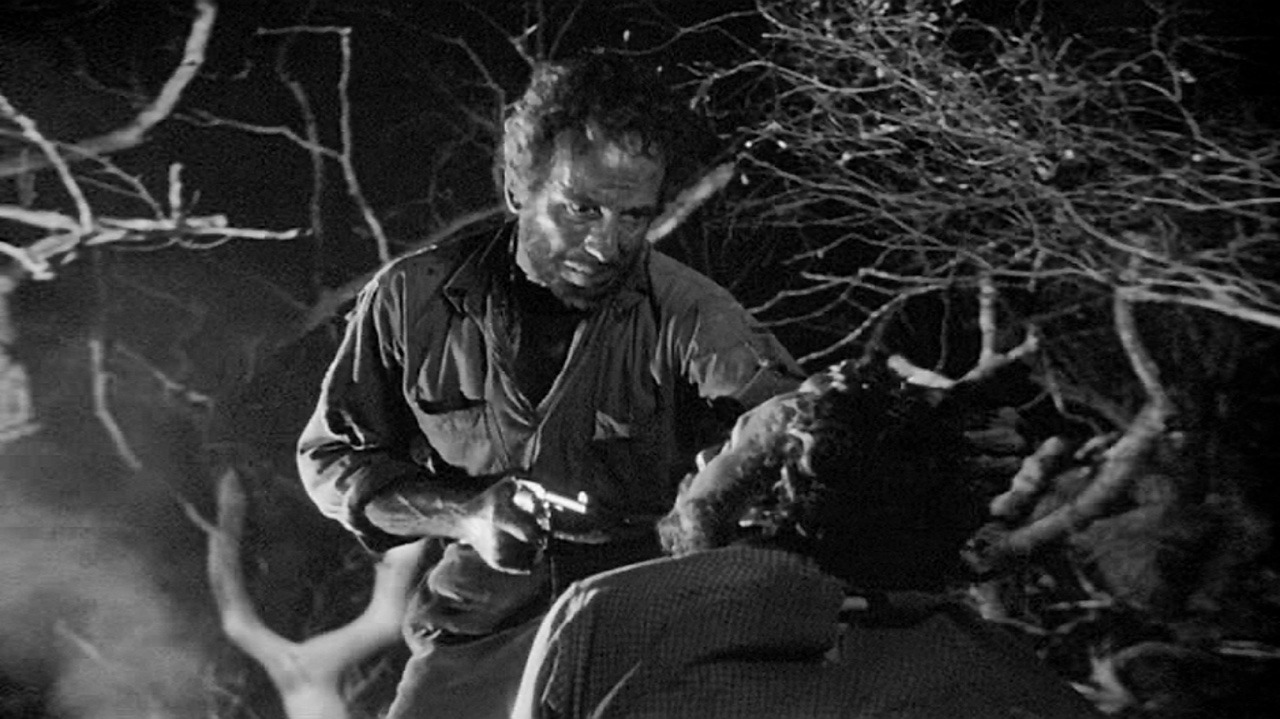 throughout the film that Dobbs would not really hesitate to kill, and that’s later shown when he kills Curtin, due to his paranoia that Curtin is going to kill him to get all the gold. The saddest part of that moment is that Curtin had saved Dobbs life when the gold mine collapsed. But, Dobbs just as easily forgets about that and let’s his delusions get the better of him. Fittingly enough, Dobbs is killed in the end by the same Bandits the three men fought off earlier in the film. And the beautiful irony is that he isn’t killed for the gold that he has. He’s killed because the Bandits want to sell the burrows and animal pelts in town. They dump out the gold, mistaking it for merely sand, thus negating the 10 months of excruciating work the men did. When Curtin and Howard realize what has happened, they laugh it off because, honestly, what else can they do? Mother nature has taken back what was hers.

There is also a great emphasis on mother nature in this film, although it comes second to the greed. Howard

repeatedly talks about respecting the land. He makes it a point to tear down the mine and put the land back how they found it. The mountain gave them the gold, and it’s the least they can do, which is the reason the ending plays so well. Mother nature has taken back the gold. She’s taken it back to the mountain in the harsh winds, right back to where it came from. Thankfully, both Curtin and Howard had grown during this process, realizing how they want to spend the rest of their lives: Curtin working on a fruit farm, and Howard being a medicine man to a village of natives, as he had saved a young boy in the village, which they were grateful for. That bit of the film with Howard definitely plays into the White Saviour Complex, but I’ll get into that another time.

This film, although labeled as a western, is anything but, I think. It is very much an adventure film, focusing more on the behaviour of man than the actual adventure. I feel that, unlike other films labelled as Westerns on this list, that The Treasure of the Sierra Madre absolutely deserves to be on and remain on this AFI list for years to come.

If you really want to just watch a film that is a solid good time, I definitely recommend Nobody. ⁣
Flashback Friday! TBH, Rupert Everett is everything in this film. Who remembers watching this?
Giant monkey fights giant lizard with an amazing color palette surrounding them both. ⁣
The only thing that pulls me out of this film is how quickly Sam Spade and Brigid O'Shaughnessy fall for each other. What has it been? Like a day? ⁣
Look, all these group shots were cool. And the interaction between Batman and Joker was *chef's kiss*. I really just wish the whole film had that same tone and emotion that the Epilogue did. ⁣
Flashback Friday! I loved this film so much as a child. More than the first Flintstones movie they did. Ya know, the one with an entirely different (and arguably better) cast? ⁣
%d bloggers like this: