Talk about a well written film. The Talented Mr. Ripley, released in 1999, was written and directed by Anthony Minghella, based on the novel by Patricia Highsmith. The film starred Matt Damon as the titular Mr. Tom Ripley, Jude Law as Dickie Greenleaf, Gwyneth Paltrow as Marge Sherwood, Cate Blanchet as Meredith Logue, and the late great Philip Seymour Hoffman as Freddie Miles. The film follows Tom Ripley, as he lies and assumes identities. But, there’s no telling how far he’ll go once his secrets are threatened. 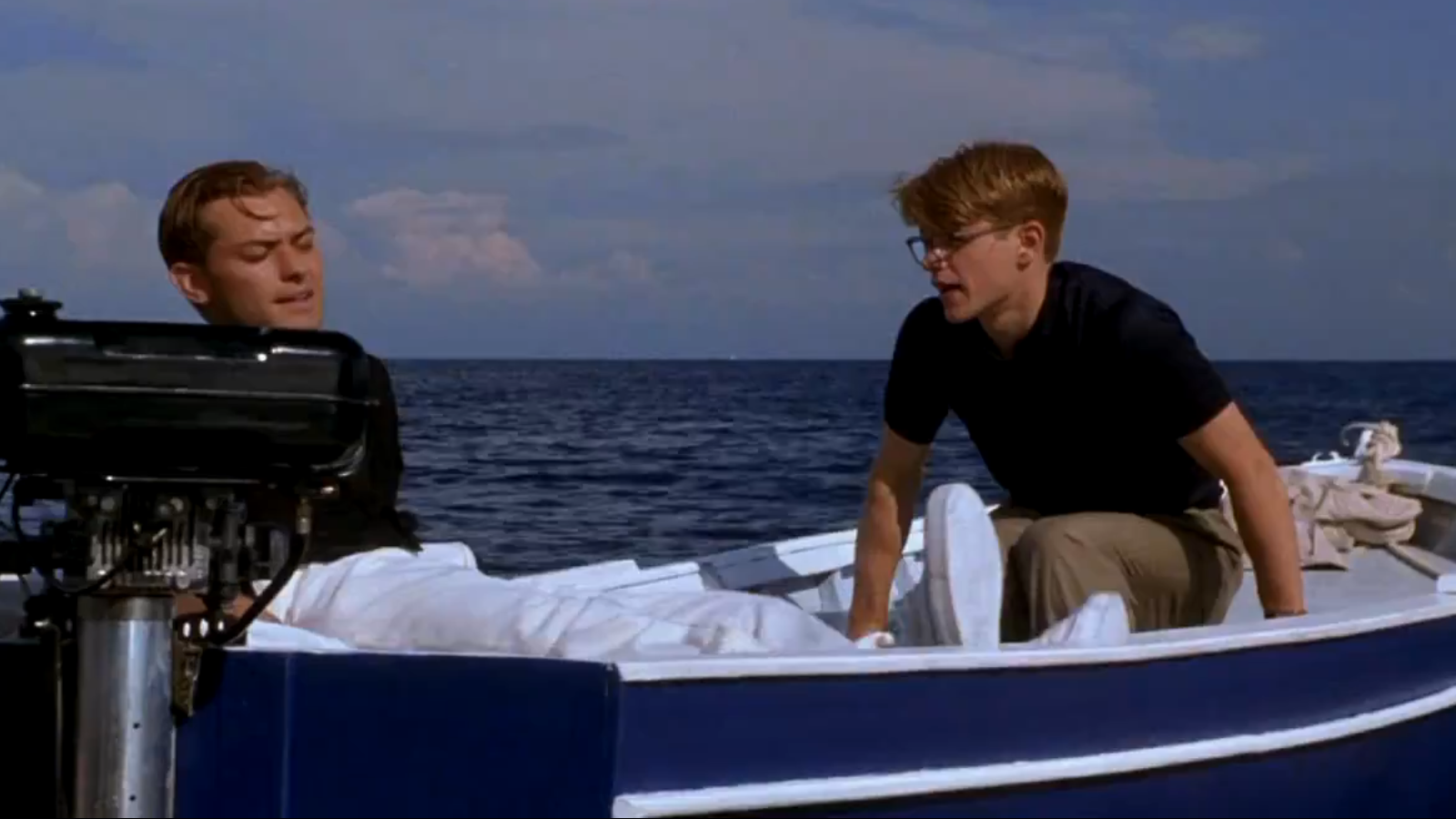 Honestly, this film is one of the most well done films of the last twenty or so years. The cinematography and the acting are top notch and the writing is solid. In fact, trying to find another film as solidly written and air tight as this one is difficult. From start to finish, The Talented Mr. Ripley keeps the audience’s interest, whether that’s because of the interesting character’s and their development, or because of the intriguing story.

The camera work in this film is masterful. The use of reflections and mirrors over and over again, distorting the look of Tom Ripley is genius. The camera panning away slowly as Ripley does something horrible, to allow the audience to feel his shame rather than

see it, is wonderful. This technique is particularly effective after Tom kills Dickie. Not even the camera wants us to see how shameful Tom feels. It’s used again later when Tom realizes that he has no choice but to kill Peter Smith-Kingsley (Jack Davenport), if he doesn’t want his lies to completely collapse in on him or dig himself deeper. The use of mirrors is equally as genius and impactful, particularly at the end of the film, where Tom states “I’ve made a mess of being Dickie Greenleaf, haven’t I?” while the visual is Tom looking at his reflection splitting in two, showing the audience his return to just being Tom Ripley.

Speaking of Peter Smith-Kingsley, I want to briefly touch on the sexuality of all of the male characters in this film. Never once is the sexuality of each character explicitly mentioned. We are merely given small hints that each one may be gay or bisexual, particularly with Dickie Greenleaf, who seems to toy with Ripley, knowing exactly how Ripley feels. The irony of this situation is that Ripley, who does seem to be confident in his bisexuality but not in his full identity, is now surrounded by others who seem to question their sexuality, therefore also struggling with their full identity. They just, you know, deal with it in a semi-normal way instead of constantly committing identity theft.

The perfect amount of tension is built and maintained throughout the film. It’s very well written and adapted with seemingly little to no plot holes. Each actor loses themselves in their roles, leading the audience to forget that it’s Matt Damon they are watching, or Jude Law. It’s easy to see why the film was nominated for 5 Academy Awards. And, honestly, much like I hold all science fiction/alien-centric films to the standard of 1979’s Alien, I hold nearly all crime thrillers to the standard of The Talented Mr. Ripley.