The story of T.E. Lawrence, the English officer who successfully united and led the diverse, often warring, Arab tribes during World War I in order to fight the Turks.

I remember first seeing this film in college. I was taking a class on Filmmakers of the 50s and 60s. We were studying David Lean and we watched Lawrence of Arabia over 2 class periods over 2 weeks. We were then asked to write a paper where the first half had to answer the question “What do you think was T.E. Lawrence’s motivation?” And I remember that being one of the easiest papers I ever wrote.

Despite my dislike for Bridge on the River Kwai, I enjoy David Lean as a filmmaker very much. He directed films with an editor’s eye and that is most evident with Lawrence of Arabia. It’s clear the amount of thought that went in to each scene transition in the film.

Lawrence of Arabia is also a film that was made to be seen on the big screen. The use of sweeping landscape shots, wide angles, and anamorphic lenses makes that very clear. I have been lucky enough to see this film on the big screen at the Egyptian Theater in Hollywood, and it was an incredible experience.

Now, I said earlier that the easiest paper I ever wrote in college was partly answering the question “What do you think is T.E. Lawrence’s motivation?” So, let’s talk about T.E. Lawrence. The titular Lawrence in Lawrence of Arabia was played by Peter O’Toole in his very first feature film starring role (which is impressive just by itself). In the simplest terms, Lawrence has a major God Complex. This is made crystal clear throughout the film with lines like “Do you think I’m just anyone, Ali?”, “They can only kill me with a golden bullet” and constant religious imagery being used.

Let’s get one thing clear right now: Lawrence is not a great man. He is flawed. Unbelievably flawed, and he does not see it. I truly enjoy the fact that the film does not frame Lawrence as a hero in any way. Early on in the beginning of the film there’s a line about Lawrence from someone who attended his funeral: “the most shameless exhibitionist since Barnum and Bailey”. He had a God Complex. He hated the skin he was in. He wanted to be perceived as an Arabic man, not a Caucasian one. He wanted to be the one person to give the Arabs their freedom. He immersed himself into the culture so much, he loses who he is. And then he is reminded, very painfully, that he is not an arabic man, he is not a god, and he can bleed just like everybody else. Ultimately, Lawrence is used as a pawn by both the British army and by Prince Faisal.

Now, I need to talk about Prince Faisal and how I forgot that he is played by none other than Alec Guinness in brown face. 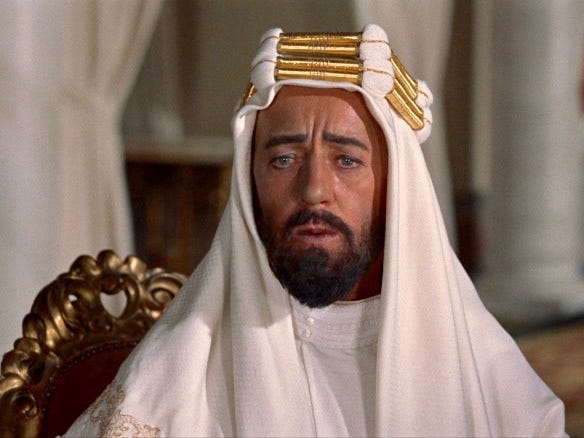 At this point, do I even need to talk about why this made me uncomfortable? I mean, yeah it was 1962, but there wasn’t another Arabic actor in all of Hollywood that could play this part? Then again, they also have Anthony Quinn, who was a Mexican-American actor, playing Auda Abu Tayi. So, I guess I should just be happy that they at least casted Omar Sharif in this film as Sherif Ali.

Omar Sharif shines in this film as Sherif Ali.  Although, Sherif Ali greatly boosts Lawrence’s ever growing ego throughout the film, he also keeps Lawrence grounded. It’s a dynamic that certainly has romantic undertones to it, at times. And that’s a whole other aspect of the film to unpack at, hopefully, a later date.

My favorite aspect of this film, and one of the reasons it remains a film that I love, is the score by Maurice Jarre. Do me a favor and listen to just the Overture. Please.

It’s so hauntingly beautiful. And was clearly inspiration for countless film scores to come.

I love that this film is more a character study of Lawrence than it is a film about war. The whole film is perfectly crafted, from the mise en scene to the words coming out of the actor’s mouths. I think this film is impressive and beautiful, but do I think that it should land within the top 10 of the American Film Institute’s 100 Greatest Films list? That I am honestly not sure. I’m just as surprised as you are.

Peele's new film seems to be either you loved it or you hated it? Have you seen it? What did you think? Low-key, I'm obsessed with Keke Palmer. Head over to That Old Picture Show to read my full review on Peele's third film! (Link in bio)
Lawrence of Arabia is a film that I love dearly. However, I'm not sure that I agree with it's placement in AFI's 100 Greatest Films over 100 Years. ⁣
Who saw Thor this past weekend? Honestly, I thought this poster was more exciting than the film as a whole, but that may be just me. Head over to That Old Picture Show to read my full review on the 4th Thor film in the MCU. ⁣
Who has seen The Black Phone? Is it just me or was it very underwhelming? Click the link in my bio to read all my thoughts on Scott Derrickson's most recent film and let me know yours!
Remember that time I got to see a pair of Dorothy's Ruby Slippers on display at the Academy Museum in Los Angeles, California? I do.
I've finally hit number 10 on AFI's 100 Greatest Films list! The Wizard of Oz is obviously a classic, but we all know how I feel about Glinda the "Good" Witch. ⁣
%d bloggers like this: