A silent film star falls for a chorus girl just as he and his delusionally jealous screen partner are trying to make the difficult transition to talking pictures in 1920s Hollywood.

I firmly believe that this film has stood the test of time and remains on this list because it is a near perfect look and commentary on what happened during the transition from silent films to “talkies”. Singin’ in the Rain being a musical is  no coincidence, either. Once “talkies” became the thing, the natural progression was to make musicals. Music was and is universal, after all.

Starring Gene Kelly, Donald O’Connor and Debbie Reynolds, Singin’ in the Rain has become known as one of the best movie musicals of all time. Co-directed by Kelly and Stanley Donen, Singin’ in the Rain is filled with spectacle, and not only in the song and dance numbers. The sets are marvelous, and the chemistry that the actors have just radiates off the screen.

I really want to try and get across to you how clever this film is. In the beginning of the film, we are at a film

premiere, waiting for Don Lockwood (Kelly) and Lina Lamont (Jean Hagan), the stars of the film, to arrive. At this time in Hollywood, the late 1920s, gossip columns were just becoming a “thing”. This was the start of “controlling the narrative”, some might say. And nothing shows that better than Don Lockwood speaking to Dora Bailey at the start of the film. Bailey, being loosely modeled off of real life “Queen of Hollywood Gossip” Louella Parsons, asks Lockwood to tell the people about his beginnings, how he grew up, how he became an actor. As Lockwood speaks, making his life sound privileged and carefree, the viewer gets to see the reality of Don Lockwood’s upbringing. It’s a genius moment where the narrative is being controlled. Just like Hollywood remains today, honestly.

Although in a more lighthearted fashion, Singin’ in the Rain shows the struggle of the late 1920s, and shows the reality of the industry shift with one of my favorite characters, Lina Lamont. There were a large number of actors that, once talking pictures became the new normal, their careers were halted, for one reason or another. For some, it was because of an accent. For others, it was because they simply couldn’t read lines well. With the character of Lina Lamont, played masterfully by Jean Hagan, her “flaw” is her voice. In another genius move, Jean Hagan doesn’t speak a single word until after the beginning of the film. And that’s when we all hear it:

The studio’s solution to the “problem” is to get Lina a diction coach (which does not work) and then ultimately, they dub her voice in her upcoming film. This happened frequently during this time, and was still happening in 1952. Because, in a weird turn of events, Debbie Reynolds’ singing voice is dubbed by Betty Noyes on both the songs “Would You” and “You Are My Lucky Star”. And, even in the moment below, while Reynolds’ character Kathy Seldon is dubbing Lina Lamont’s dialogue, it’s really Jean Hagan speaking in her normal speaking voice.

You know, for a film about dubbing and people not being credited for it, Singin’ in the Rain sure does a lot of it.

Back to Lina real quick, as I did mention that she is one of my favorite characters. And, you see, that’s because I 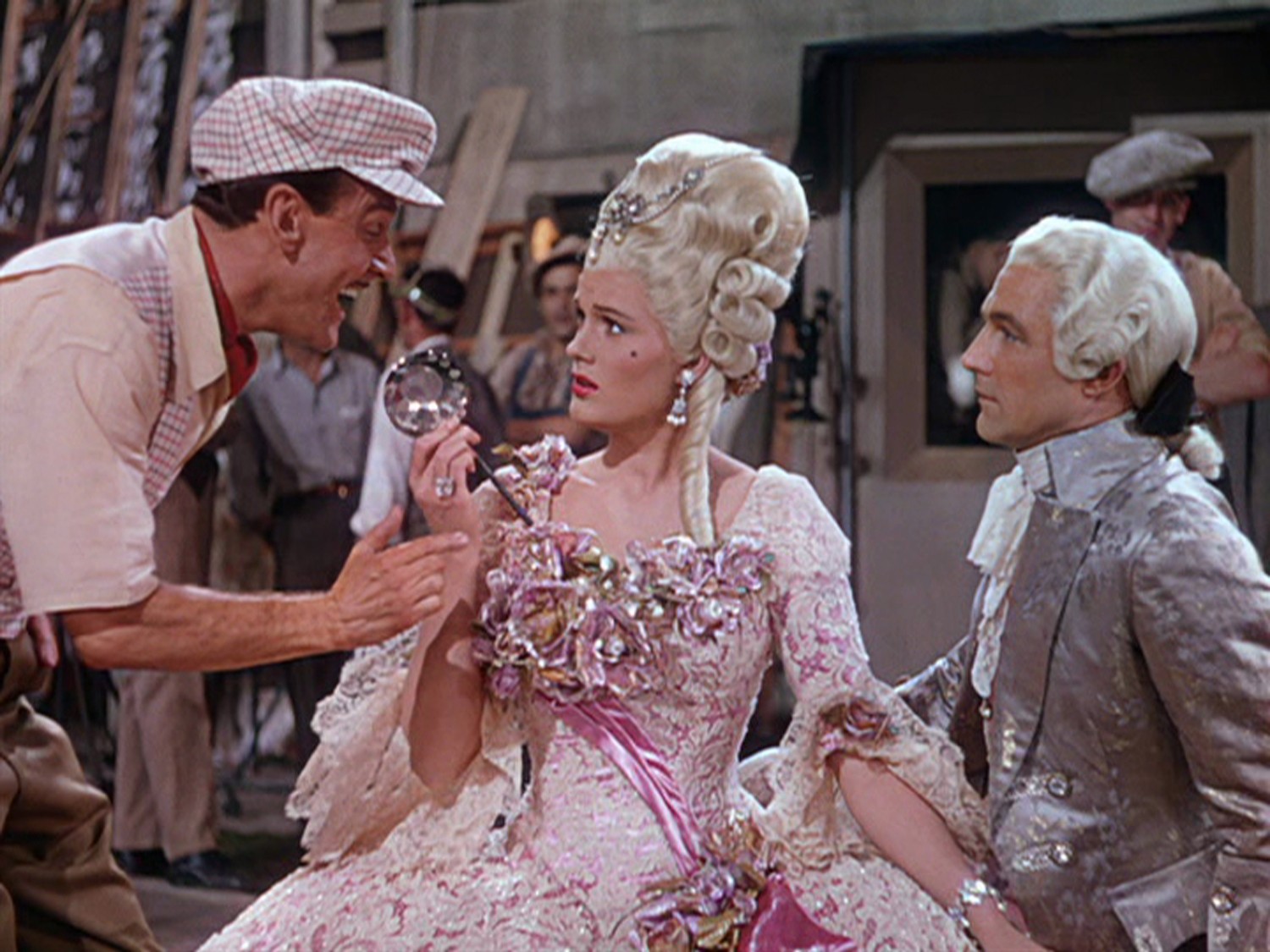 don’t think Lina is necessarily the “villain” they make her out to be. Here we have a woman who has had a very successful silent film career up until this point. She is an actress who’s PR is very controlled to make her seem elegant and refined. Her actual demeanor is not quite. She’s loud, vain, and outspoken to those around her. She’s never been told that her voice would make her “unwatchable”. All she’s even been told by the studio is how great she is and how much of an asset she is to them. How can we fault her for then thinking that, can we? Once she finds out that her voice is being dubbed over on her first talking film, she’s obviously upset. Again, who wouldn’t be? To Lina, there’s only one solution and that’s having Kathy Seldon dub her voice for the rest of her career. To Lina, this doesn’t seem unreasonable. The studio turned her into a star and gave her the power to control her PR in her contract (thinking she’s too dumb to ever realize that. Joke’s on them). Lina turns out to be smarter than everybody thought. Until, of course, the finale when Lockwood, Cosmo Brown (O’Connor), and the studio head, R.F. Simpson (Millard Mitchell) ruin Lamont’s career right on stage in front of the audience of the movie premiere.

Again, banking on Lamont being a bit of a ditz (“What am I, dumb or somethin’!?”) they have Kathy go behind the curtain to sing live for Lina. And, in a move that anybody could have seen coming (except Lina and Kathy, obvi), the three men lift the curtain to reveal Seldon and reveal Lamont’s voice as a fake. Talk about a career ending move. This woman was just trying to prolong the career that the studio built for her. The same studio that then gets rid of her. Almost like the women of the time were expendable to the studios or something……………………