I don’t think there is any other filmmaker in this world that can make an entire film where the ideals of the Nazi Party play an integral part to the plot, while being lighthearted and also rooted in reality. Taika Waititi is a genius.

during World War II, idolizes Hitler. In fact, he idolizes him and wants to work with him so badly that an idiotic version of Hitler is his imaginary friend (played by Taika Waititi). Jojo’s world is turned upside down when he discovers that his mother (Scarlett Johansen) is harboring a young Jewish girl in their house. Jojo, with assistance from the young Jewish girl, Elsa (Thomasin McKenzie), is forced to confront his blind nationalism.

There have been a lot of mixed reviews about this film. So, I would like to throw in my own two cents. This film is not one that glorifies Nazi’s or Nazi Germany. Jojo Rabbit is about how hatred is taught. It’s a film that shows that hatred is something that can be unlearned if somebody has an open mind. It’s a film about how we are all human. We are all the same. I do agree with some reviews that I have seen that say the film plays it a little too safe. I would have liked to see Waititi push the envelope just a little bit more. But, overall, I was happy with this film. Although, I am a sucker for satires.

Switching gears, I want to discuss the actual visual film. I thought that Jojo Rabbit was stunning to look at. There was a muted color palette throughout that worked well. There was thought put into every single frame, whether it was to emphasize comedy or to emphasize empathy and sadness. I was astonished.

This film knew how to pull on the audiences heartstrings. The performances were

wonderful, in particular Sam Rockwell and Taika Waititi. Watching Waititi transform from this idiotic, ridiculous version of Hitler to the angry, hateful Hitler the world knew was alarming, but masterfully done. I don’t think there is really a single thing about this film that I didn’t like. I enjoyed myself tremendously and, judging by the laughter and applause from the audience in my theater, I think it’s safe to say that they enjoyed it, too.

And, for anyone that doubts this as a satire: 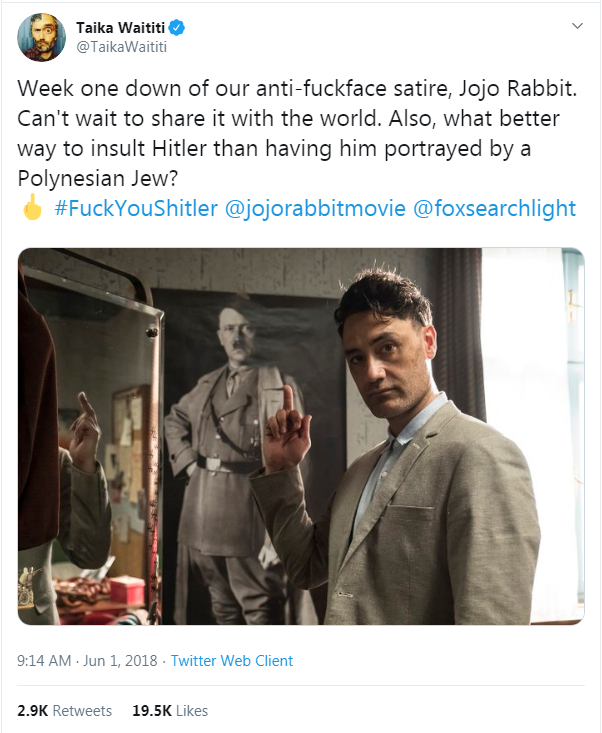 A Hollywood classic.
My platonic soulmate introduced me to this film and I have loved it ever since.
Every time I watch this film, I want a cubano. Every. Single. Time.
Another underrated film that I love. Honestly, the only reason I even found this film is because of my love of David Tennant as the tenth Doctor. ⁣
Honestly, this film has some of my favorite editing of all time. Like, it's up there with the editing in "Hot Fuzz". And, if you know me, you know that's the highest praise I can give this film.
Opened in 1922, the Egyptian Theater has become the home to the American Cinematheque. It's an incredibly gorgeous theater with so much history. I saw Lawrence of Arabia on the big screen here. And it was a hell of an experience.
Loading Comments...
%d bloggers like this: