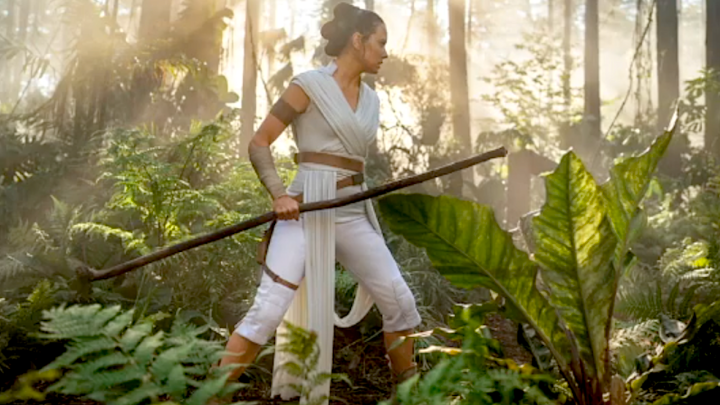 I am a person who enjoyed The Last Jedi. Say what you will about me for enjoying it, but I liked the restoration of hope in the galaxy and the idea that anybody could possess the power of The Force. Now, this angered people because it meant that the Skywalker’s were not special. They were not the only ones. So, damage control was done, and now Rey is “somebody”. As much as I don’t like that this fanservice was done, I am conflicted because I like the story line they went with for Rey. It was a storyline that I theorized way back during The Force Awakens, so I may be a little biased.

The only other bit of the film that was unsettling for me was the CGI used for Carrie Fisher’s, General Organa. Yes, it is only appropriate that Leia gets a send off. She absolutely deserves it. But, it felt patched together. The fact that she isn’t actually there interacting with the other actors is very clear and it lacked any emotional connection. It just felt wrong and I wish they would have figured out another way to lay that character to rest.

I enjoyed the cameos in the film and I did like the overall story. It kept me interested and entertained. However, including things in the film that you will only understand if you have Disney+ and have seen The Mandalorian, does not feel right. It feels like Disney is segmenting its audience. It’s not fair that, if you don’t have the money to subscribe to Disney+, that you then miss out on certain aspects of the films. That does not sit well with me.

On a bit of a different note, this is the Star Wars film that finally made me attracted to Adam Driver, so that has been a fun development.

I constantly find the Star Wars fandom frustrating. I want to preface this by saying that I consider myself a member of said fandom. For god’s sake, I have Princess Leia tattooed on my arm. But, the hatred, the absolutely polarizing hatred, that seems to spawn from this fandom is unbearable. Just because a film did not do exactly what you wanted it to, just because it didn’t go the way you thought it would, does not mean that it is a bad film. It does not mean that the makers of the film have no clue what they are doing. Just because a storyline does not fit with the narrative that you want, does not mean it is bad. Period. That is not valid criticism at all.
What happened with the backlash from The Last Jedi was horrendous. People were mean. They bullied people who were involved in a series that they loved, and why? Because they didn’t like the character an actor played? Or because they didn’t agree with the ending? Film is subjective. You cannot be mad at someone because their opinions about a film do not agree with your opinions.

I honestly do not think that there is any way to please the entire fan base. The Last Jedi backlash was due to lack of fan-service. Now, there’s backlash on The Rise of Skywalker because there is fan-service and people disagree with said fan-service. What kind of hypocritical mess is this?

Plain and simple, there is no pleasing everybody. If you liked the film, great! Good for you! Enjoy it! If you did not like the film, fine. Be vocal about it, but don’t be mean. Do not bully people because they are  “wrong” for liking something. That’s ridiculous.

For goodness sake, be thankful that people still care enough to make these films. Because it’s very clear that these filmmakers for this series, all of them, care deeply.