In 1972, Deliverance burst onto the big screen, ultimately earning critical acclaim. It’s not a film that one would immediately think to rewatch. It’s known particularly for the dueling banjo’s scene and the infamous rape scene. However, it’s themes of man versus nature, city versus country, power dynamics and the nature of man make it a very compelling rewatch.

Man versus nature is one of the more present themes within this film, and it’s also the most obvious. We see four city men traveling deep into the woods of Georgia, hoping to canoe down the river before an entire town is turned into a lake by the dam being built. These four men, Ed, Lewis, Bobby, and Drew, want to conquer what they feel is untouched Georgia wilderness before it becomes a power source for the city of Atlanta.

The next clear cut theme is city versus country. This is best depicted in the famous dueling banjos scene:

The attitude that nearly all the city men have is that they are better than these country folk. They feel that they know more. Drew would be the only exception to this frame of mind, as he engages with the young boy in a call and response song. However, when he goes to shake the young boys hand, the boy turns away, indicating that there is a divide.

And, when Lewis implies that he and Bobby are better than the Mountain Man and the Toothless Man, the end result is the Mountain Man asserting dominance over the physically weaker Bobby, culminating at his rape.

And that brings me to the nature of man. Ed, Lewis, and the Mountain Man, in particular, all react to incidents with basic instincts. The Mountain Man responds with 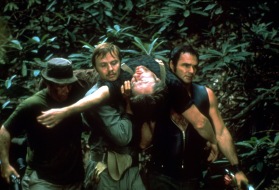 sex to assert dominance. Unfortunately, the movie wants us to see this as common for the Mountain Man and to not expect any better from the character based on our preconceived judgments.  Lewis responds with killing, as does Ed, ultimately. And that just shows that Ed and Lewis are no more civilized, if not less civilized, than everybody else that they encounter.

This is one of those films that you could analyze until your blue in the face from the discussion of rape in regards to the earth at the beginning of the film to character evaluations of the four men to the significance of the entire town being covered by water due to a dam being built to bring more power to the city of Atlanta. You could easily dive deeper with the power dynamics between the city men and the townsfolk. But, for now, this brief look into the themes of 1972’s Deliverance will have to do.